A Surge of Heat Forecast To Sweep Australia!

Home/Forecast/A Surge of Heat Forecast To Sweep Australia!
Previous Next

A Surge of Heat Forecast To Sweep Australia!

Its only the start of October, but the first item on the agenda for the warm season is an intense heatwave that is forecast to move across Australia, impacting 6 States, during a 6-7 day period starting Thursday! Above image: Maximums across Australia on Sunday via BSCH / OCF.

Australia’s heat engine is gearing up to send intense heat across much of Australia to begin October and it all starts in Western Australia on Thursday. While much of the Northern half of the State has already been baking in 38-43ºc heat for the past few days… Thursday is when that heat starts to travel. Virtually all of the Northern half and Eastern half of the State is expected to climb into the 40’s, with South East WA looking at 46-47ºc! Forrest has an October all-time record of 43.3ºc – so there is every chance this could be broken. 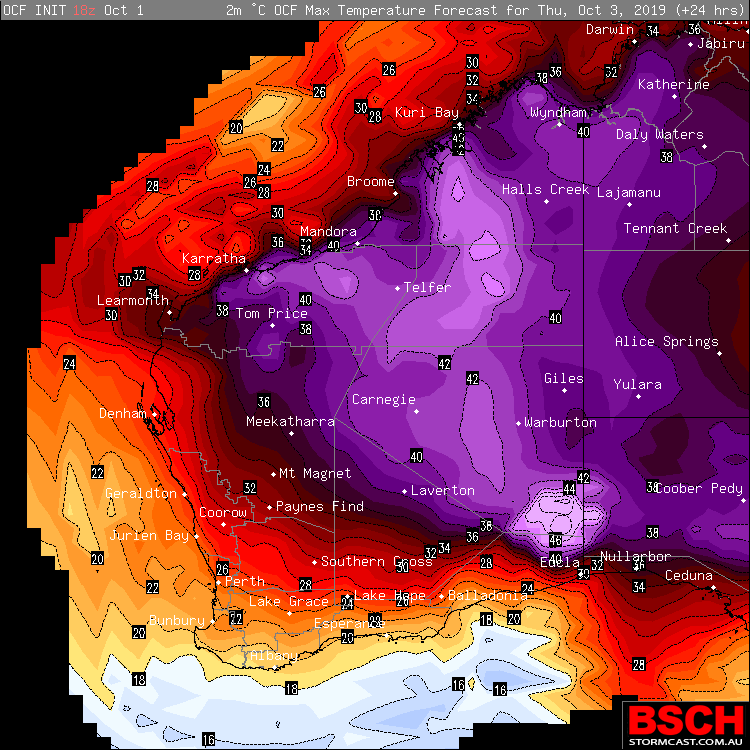 Thursday to Saturday is expected to be South Australia’s turn as well, with the core of the heat sitting over SA on Friday. Coastal areas will avoid it mostly, but Inland areas such as Coober Pedy, Port Augusta, Woomera, Roxby Downs, Tarcoola etc could see 3 straight days above 40ºc. Tarcoola’s 42.9ºc October record could very well be challenged as well on Friday and Saturday. 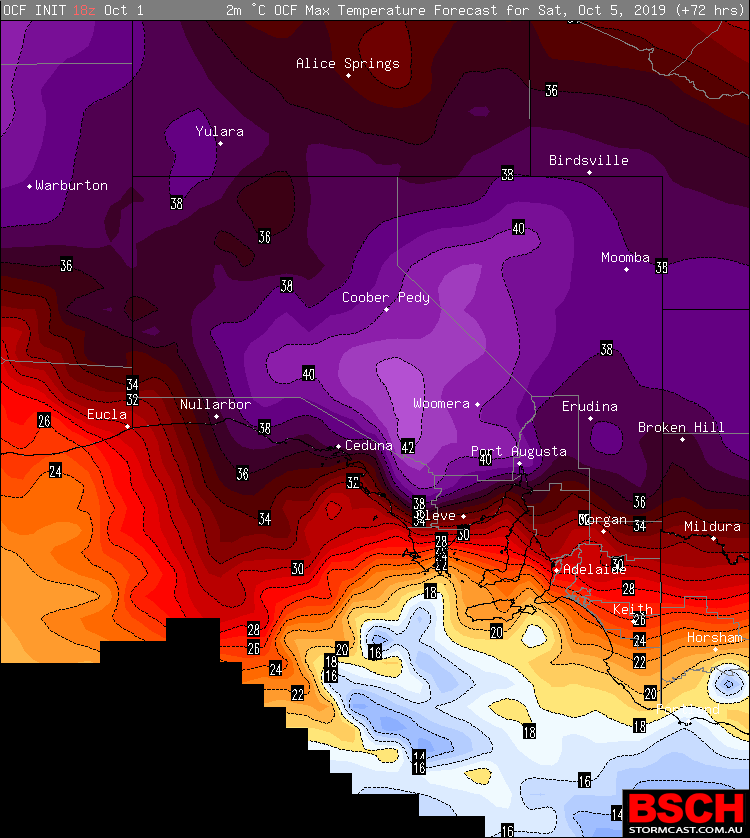 New South Wales and far North West VIC see the heat beginning on Friday with maximums into the mid 30’s. For VIC it will be short lived, but for some parts of Northern NSW it will last through to Monday with areas peaking at 40ºc over the weekend and Monday. Dubbo averages 25ºc for October, yet the area is expected to see 5 straight days above 30ºc and a peak temperature of 36ºc on Sunday! Parts of NW NSW are going for 4 straight days above 35ºc – quite normal for Summer, but not so normal for October. 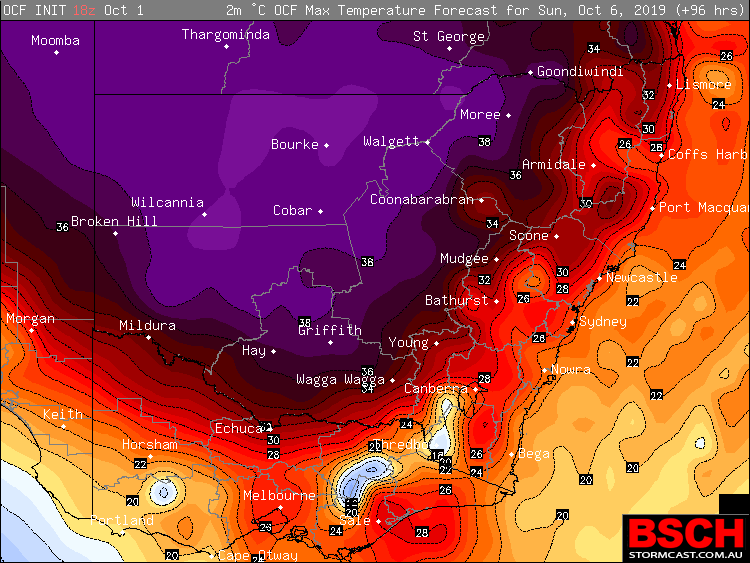 Queensland sees the heat loosely start over South West, Southern & South East areas on Saturday but across Monday and Tuesday the majority of the State away from the Coastline is likely to climb into the mid to high 30’s, even the low 40’s. For the South East Coast, places like Ipswich and Gatton may see back to back days of 40ºc on Monday and Tuesday. 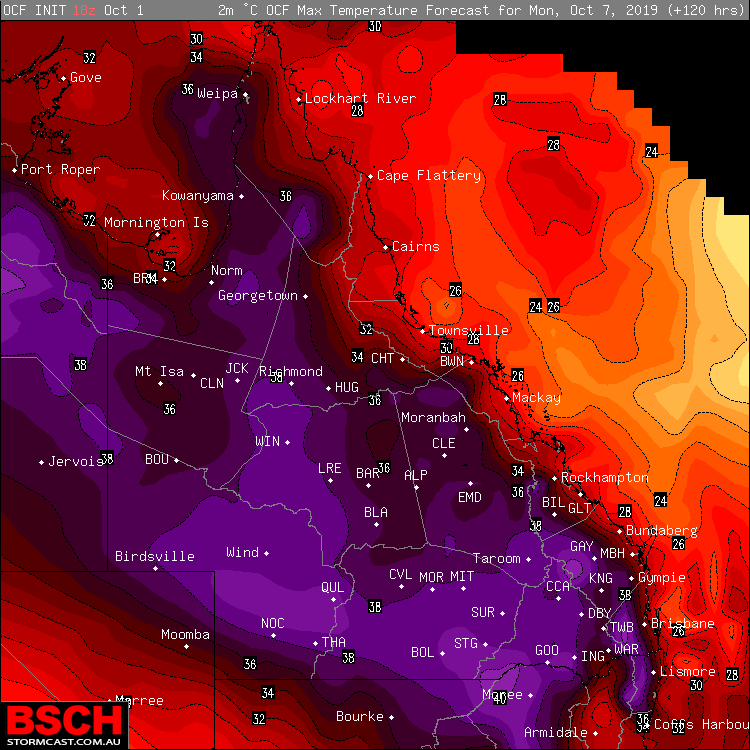 OCF Maximums for Queensland on Monday, October 7th via BSCH

Activity should ease on Wednesday across QLD, but its likely to be ramping up again for another wave of heat with the heat engine in the Pilbara of WA climbing into the low to mid 40’s again. 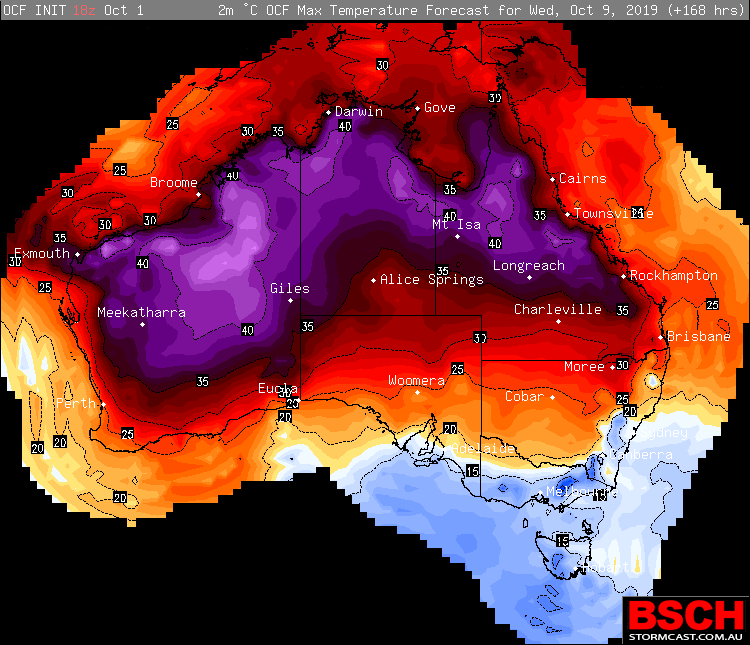