After recording the warmest start to Spring (apart from August 2009), the Southern half of QLD is now expected to see a change in conditions with temperatures up to 10-14ºc colder during the next few days than what was experienced over the past few days. Above image showing maximums across Southern QLD during Monday.

A South to South Westerly flow is expected to dominate the entire State of QLD during the next several days, lasting until at least Tuesday or Wednesday and possibly longer for some areas. These winds are expected to combine with a series of upper level troughs moving across NSW and Southern QLD which will allow for clear skies and dry air to dominate whilst colder air sinks through the atmosphere. For those who hate the heat and weren’t ready for Summer to arrive yet, this will be a welcome return – but unfortunately its expected to bring ABSOLUTELY ZERO RAIN with it. 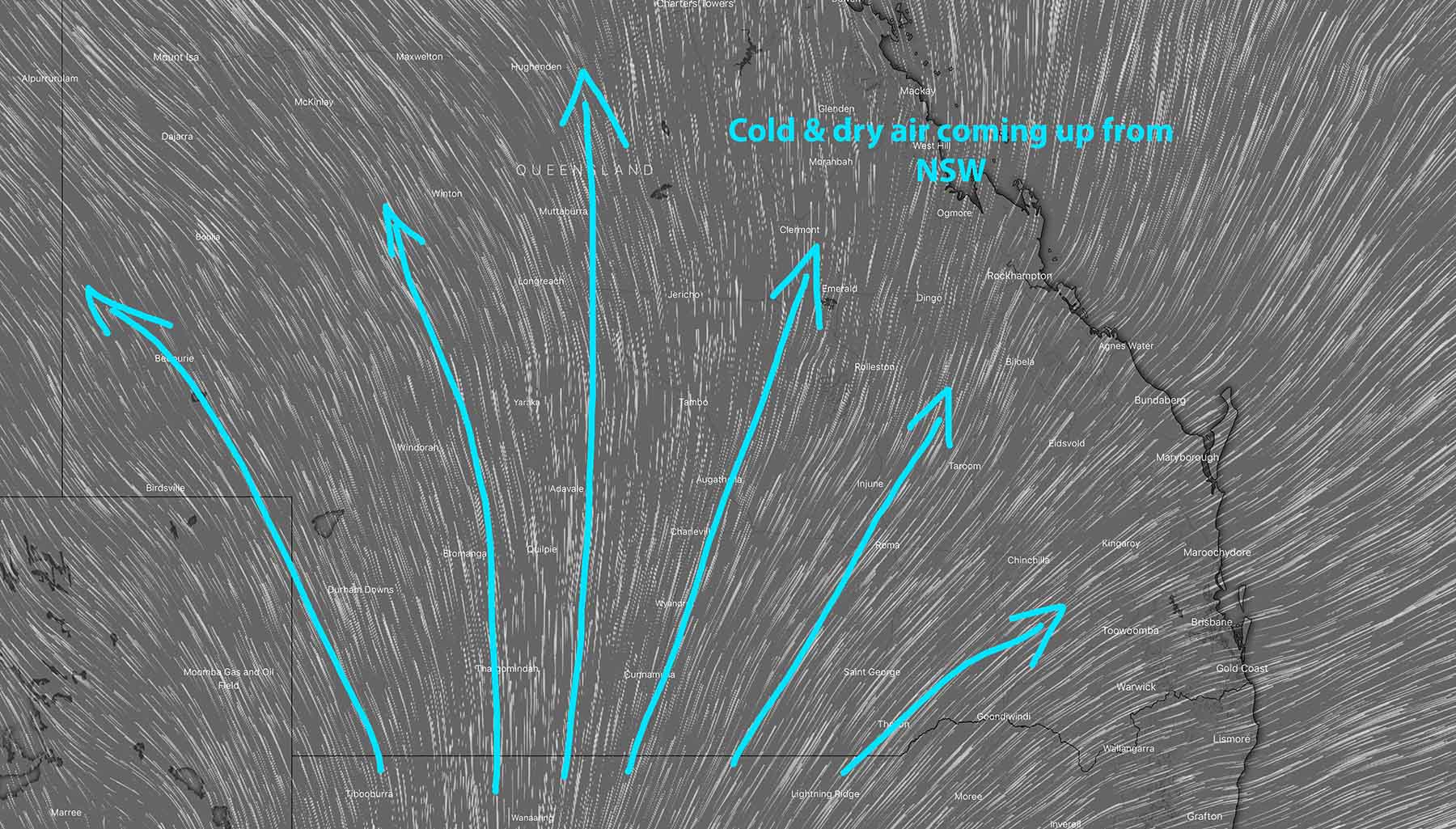 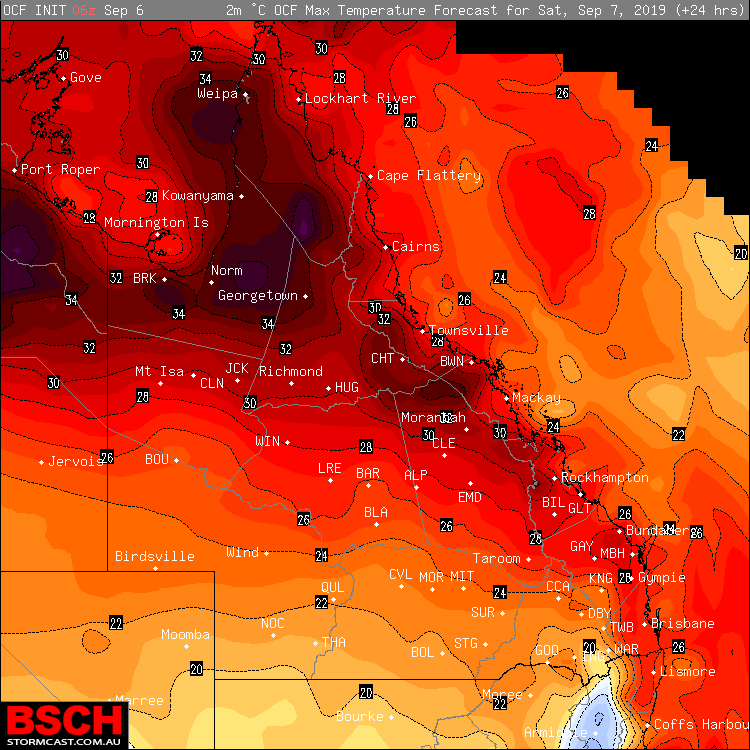 Forecast maximums for QLD during Saturday. Image via BSCH / OCF

Across Saturday, Southern Inland and South West QLD will feel the change the most with some residual heating still active over South East QLD – although the strong winds at times will make it feel much colder anyway. During Sunday, conditions across the entire Southern half of QLD should be at least average for September standards if not below average before bottoming out on Monday where maximums across the Darling Downs and Granite are likely to fail to even reach 20ºc and a wind chill factor may add to that making it feel more like single digits over the Granite Belt and Toowoomba / Warwick. 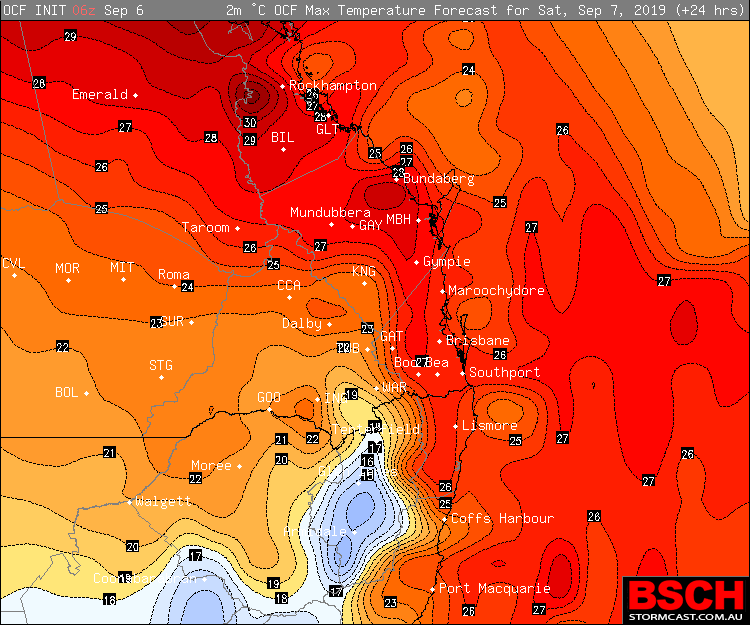 Forecast maximums for Monday showing maximums struggling to reach 20ºc across the Ranges and cool across remaining areas. Image via OCF / BSCH

During Tuesday and Wednesday daytime temperatures will start to heat up, however there is the chance of some frost over the Darling Downs and Granite Belt as clear skies and lighter winds than previous days allow for temperatures to plummet. Stanthorpe could see a few consecutive mornings of below 0ºc with -2 or -3ºc being expected for Tuesday morning. 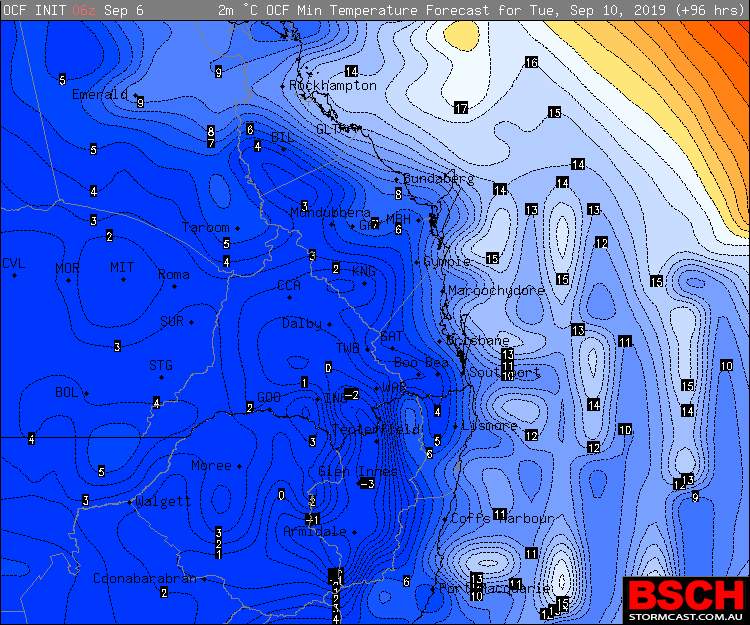