Widespread EXTREME to CATASTROPHIC, dangerous fire conditions are expected to impact South Australia on Wednesday as a combination of very strong to damaging winds, low humidity and extreme heat sweep the State. Above image: Fire danger ratings for Wednesday via BOM.

A surface trough and cold front combination are expected to sweep East across South Australia during the day, resulting in very hot and gusty conditions being funnelled down from Northern WA and the NT into the region. These hot and gusty winds are likely to impact virtually the entire State and this will likely result in widespread maximums of 40ºc+ across the State along with peak temperatures in both the South East and West of 44-47ºc! Some of these maximums are likely to challenge November records which have been long standing – including Adelaide who is going for a top of 42ºc, just 1ºc shy of its all-time November record (however on a day like Wednesday, seeing the temperature jump to 43 or 44ºc wouldn’t be a total shock). 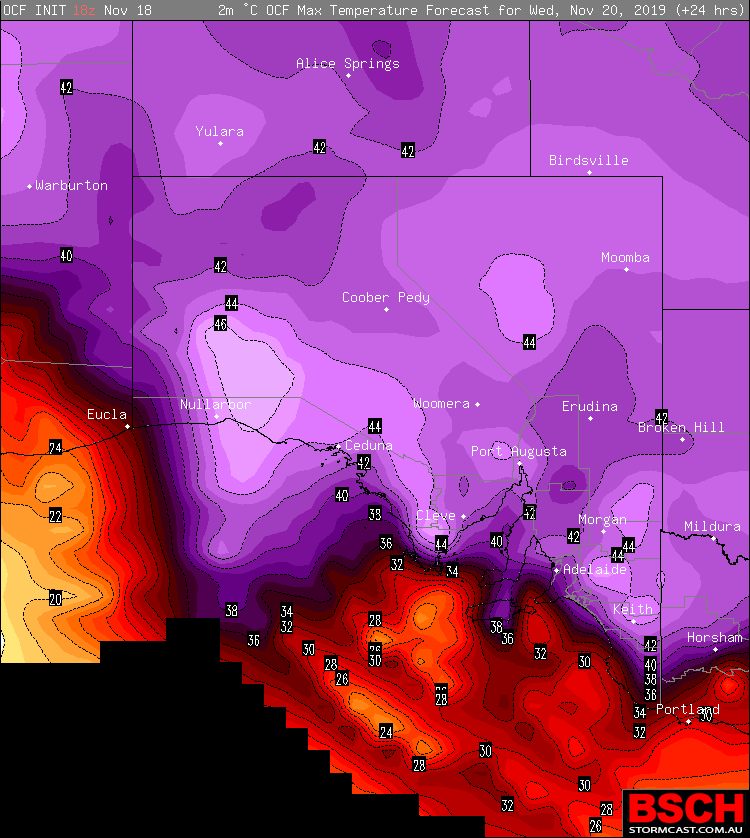 OCF Forecast maximums for SA during Wednesday. Image via BSCH.

This extreme heat is likely to coincide with very low humidity in the single digits or even down to as low as 1-3% for some areas. While gale force Northerly winds of 60-90k/h dominate much of the State during the day, even stronger winds of 80-100km/h are expected along and behind the front. These winds will not only see fire danger ratings skyrocket but they will also likely produce widespread dust storms across rural areas and Western areas. The combination of 44-47ºc, 1-3% humidity and >80km/h winds is well and truly above CATASTROPHIC fire thresholds and this will ultimately mean that any fires that do develop, are likely to become extremely fast moving and out of control very quickly. 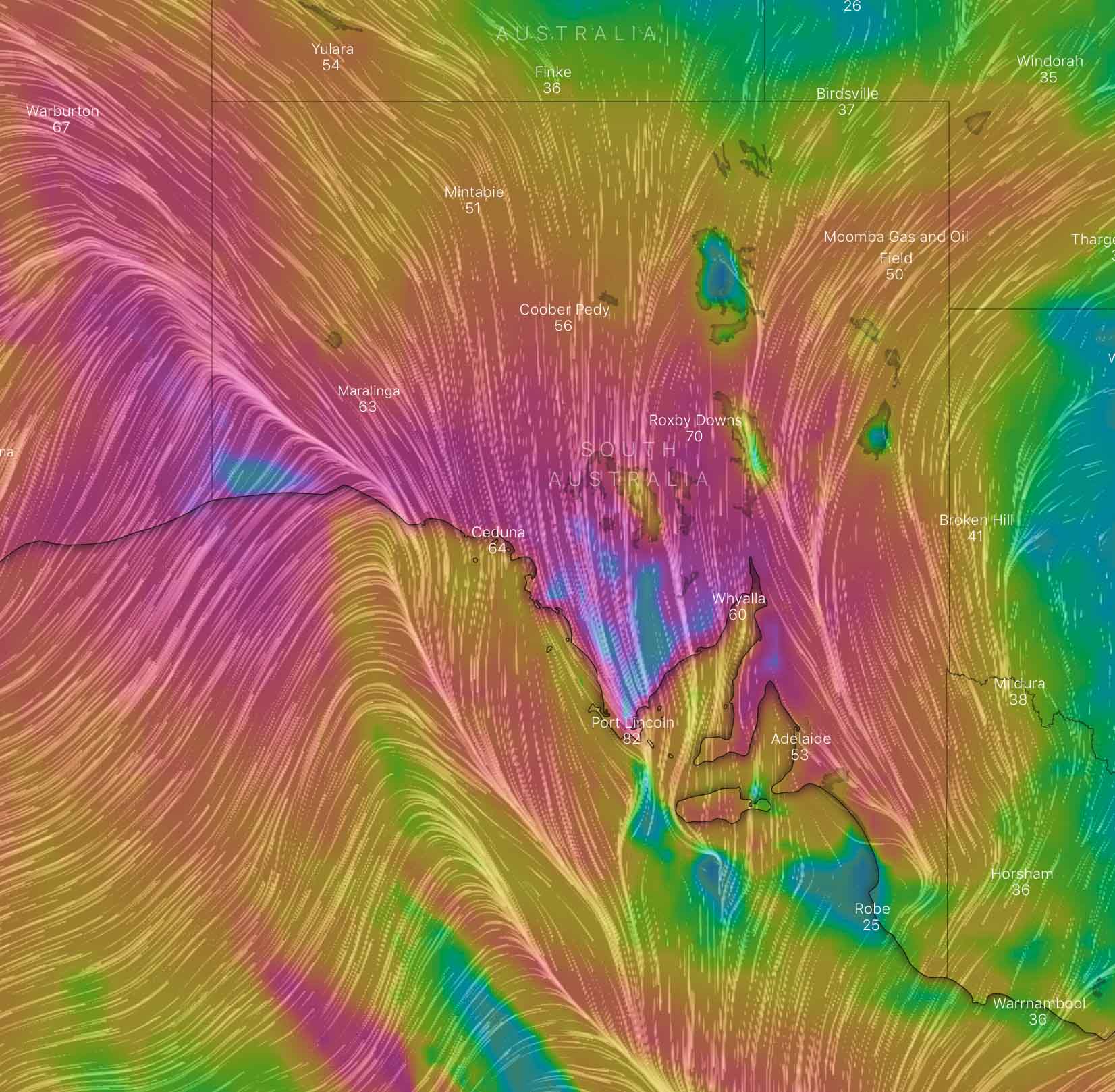 Forecast wind gusts across SA during the afternoon. Gale force Northerlies of 60-90km/h (pink to aqua) ahead of the front and the same, but stronger, behind the front. Image via Windy.

Districts that are currently seeing CATASTROPHIC fire conditions include: The West Coast, Eastern Eyre Peninsula, Lower Eyre Peninsula, Mid North, Mt Lofty Ranges, Yorke Peninsula. EXTREME fire danger threats which will likely have localised CATASTROPHIC conditions are expected to be situated over the Flinders, Kangaroo Island and Lower South East. The remainder of the State is at SEVERE with no doubt some localised EXTREME conditions. This setup is essentially as dangerous as it can get. Firefighters will be working around the clock the ensure everyone is safe, but if you do see a fire – please report it ASAP to emergency services and follow their instructions! 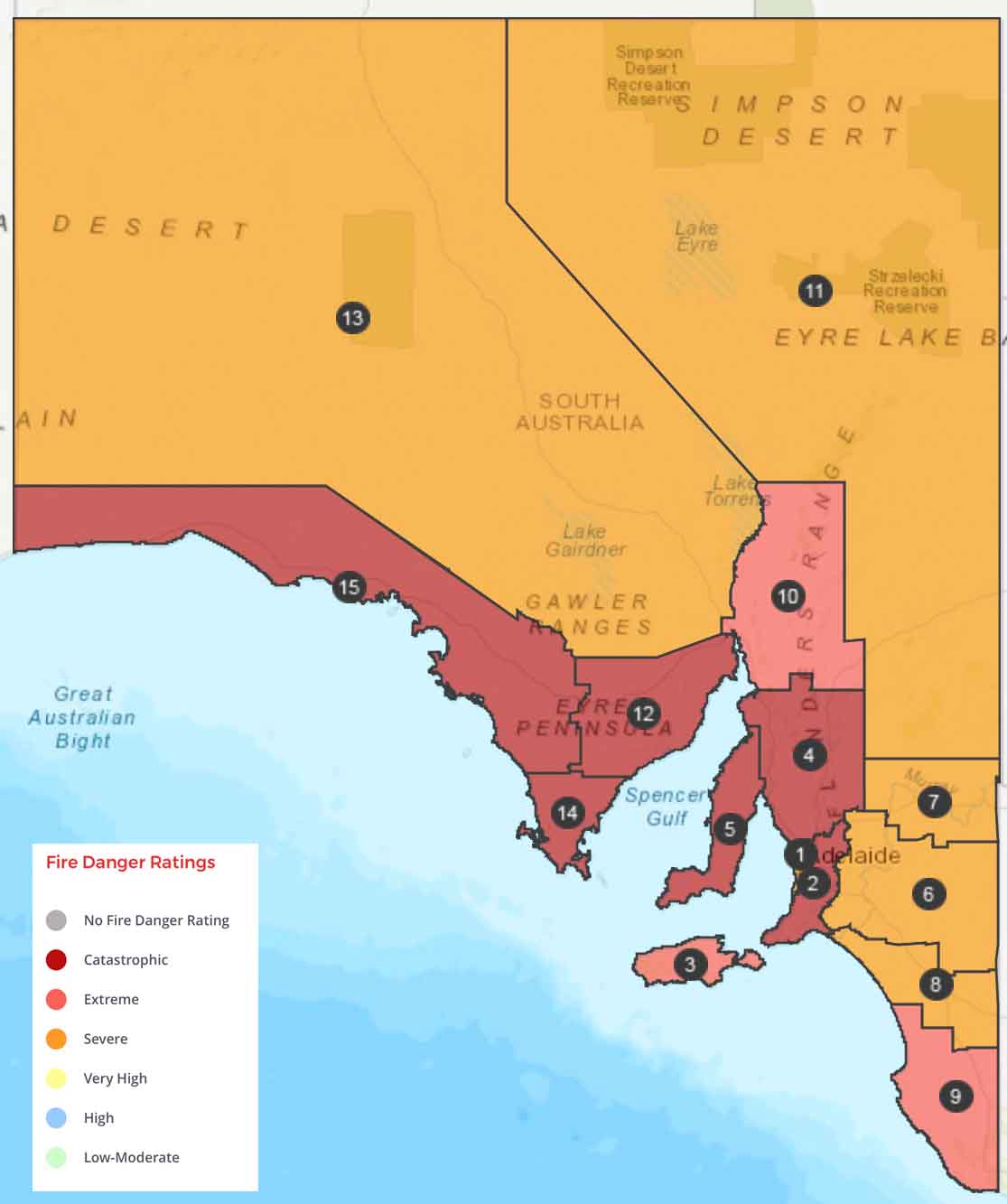