Issued Sunday, November 10th 2019. Valid for Tuesday, November 12th 2019. A WORST CASE SCENARIO has been issued for the Greater Sydney, Central Coast, Hunter and Blue Mountains areas on Tuesday as CATASTROPHIC fire conditions are forecast due to a near-perfect setup for fires impacting the area.

Note: This is the FIRST time since the Catastrophic Fire Danger level was introduced into the Australian system back in 2009, that one has been required for Greater Sydney.

Forecast: On Tuesday, an extremely volatile setup is forecast to impact NSW resulting in some of the worst and most favourable fire conditions we have seen since Black Saturday back in 2009. A surface boundary is expected to become situated DIRECTLY ALONG the NSW Coast. This will help draw in STRONG to DAMAGING & DRY West to South West winds across the entire State. A cool change is forecast to move up the NSW Southern and Central Coast areas during the day, with STRONG to DAMAGING winds occurring along and behind this change. These DRY winds will coincide with very warm and dry air aloft which will help produce hot conditions as well, with peak temperatures in excess of 35ºc for most areas and in excess of 40ºc for some. Forecast maximums across NSW for Tuesday via OCF / BSCH

Threats: The focus for the fire threat will be over the Central Coast, Greater Sydney, Hunter, Blue Mountains, Illawarra and Shoalhaven areas. Across these areas we are expecting wind gusts in excess of 70km/h for most areas and peak winds of 100km/h+ for some. These winds will coincide with temperatures of 35-42ºc leading to very dangerous fire conditions leading to the requirement for a CATASTROPHIC fire danger threat to be forecast. A cool change moving through the area will also pose a risk for ongoing fires to be blown in a new direction and create additional issues with embers blowing potentially several kilometres ahead of any pre-existing fires. Any fires that develop over these areas will become uncontrollable VERY QUICKLY, and given the population in these areas there is a SIGNIFICANT risk to homes, properties and lives!

A large area of EXTREME & SEVERE fire dangers have also been issued across remaining Eastern half of NSW. These areas are likely to experience winds of 50-70km/h with peak temperatures also in the mid to high 30’s and possibly up to 40ºc. The biggest threat across these areas will be the fact that ongoing fires WONT be contained by Tuesday and therefore any fires, particularly large ones, as well as ones that are inaccessible, will quickly become uncontrolled and pose additional threats. 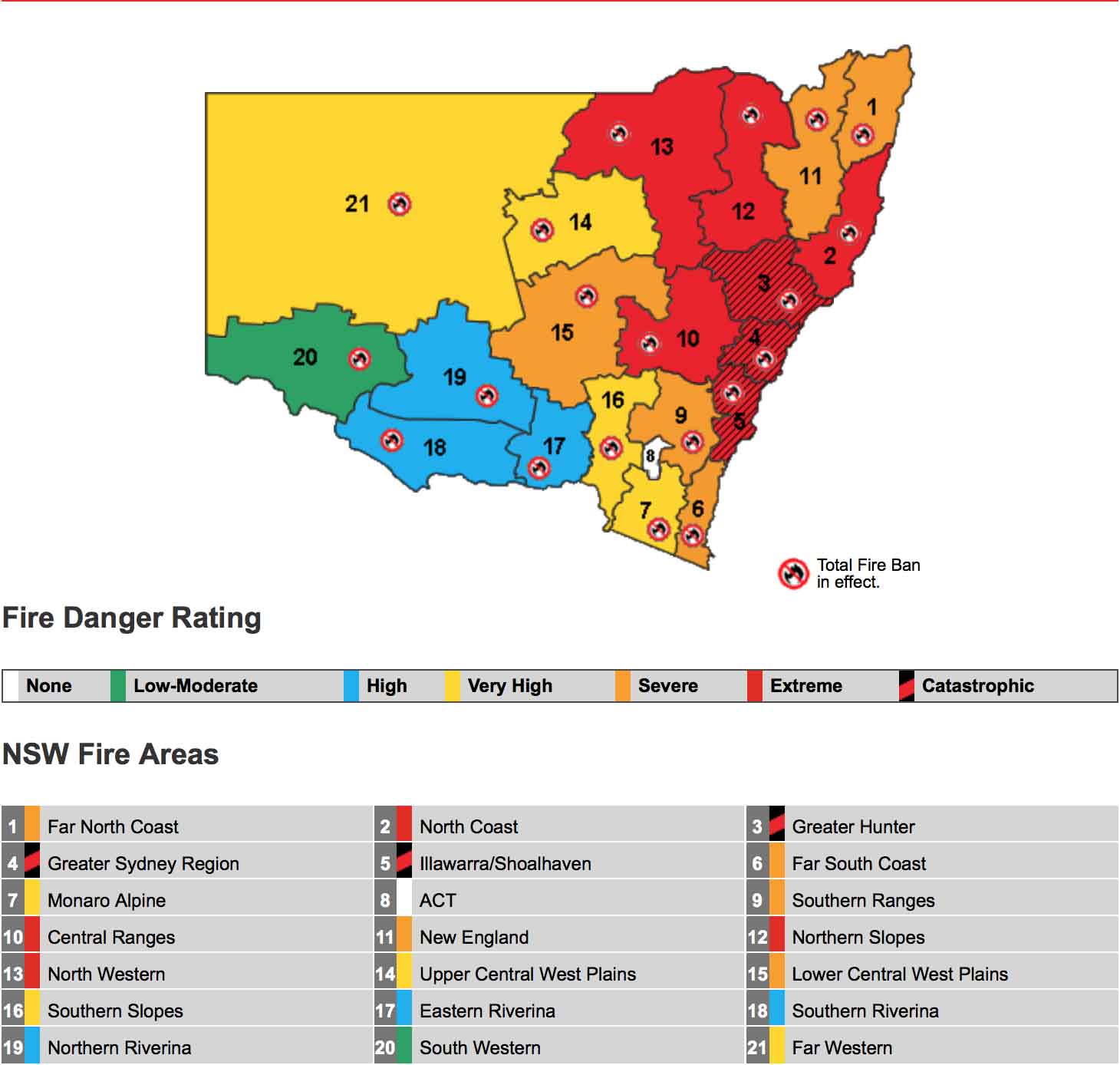 Safety: Please have an emergency plan in place NOW! If you do not know what one is please follow this HERE. Do this NOW will you have time! Its better to have it done and not need it. Some schools are scheduled to be closed due to the conditions as a means of safety in the highest risk areas (Catastrophic risk), if you are in this risk and are not sure – please contact your school directly. 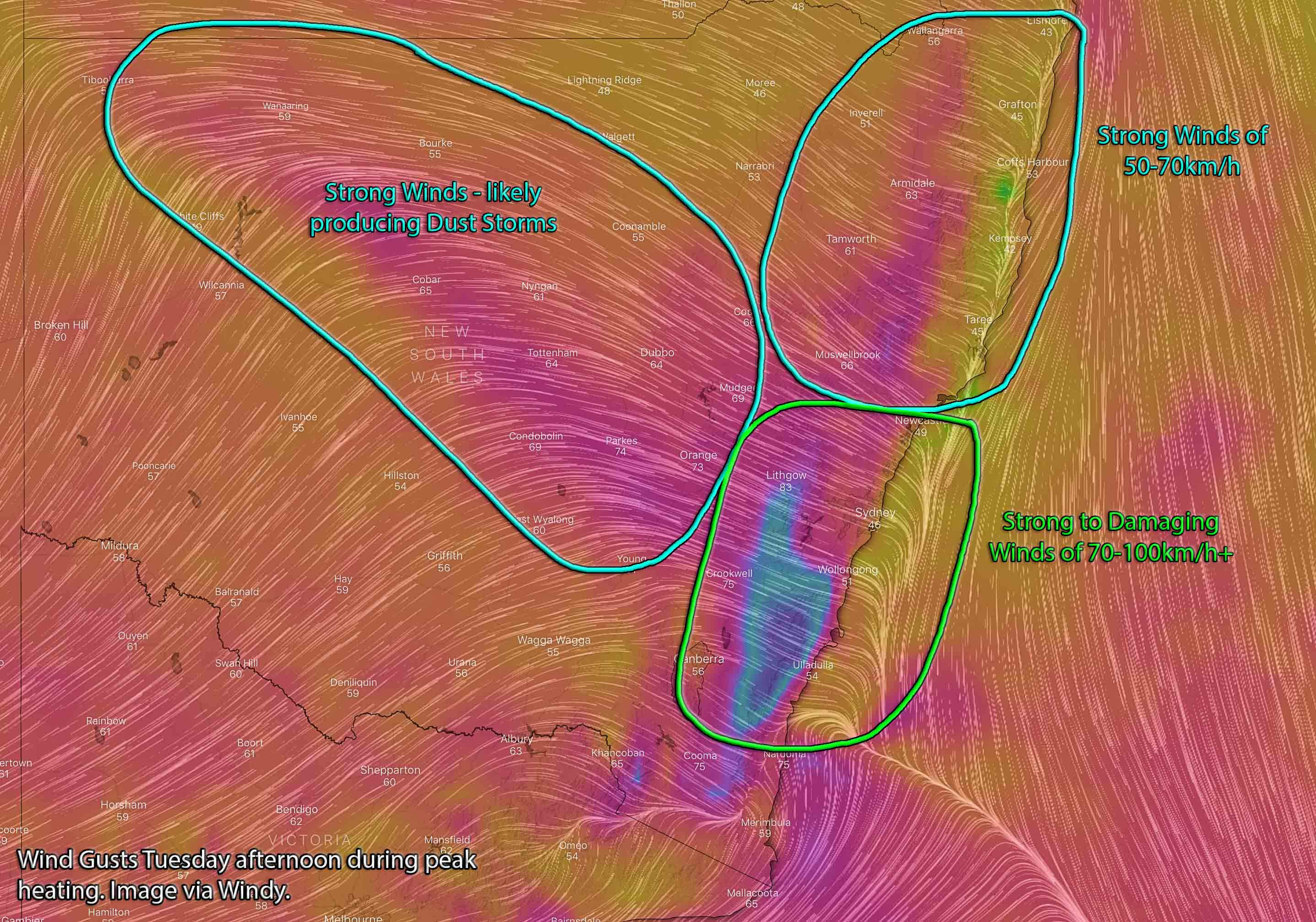 Wind Gusts for NSW on Tuesday afternoon via Windy.