Much of QLD is expected to endure hot conditions over the next several days, triggering an increased risk of bushfires and some raised dusty / dusty conditions. Above image – Maximums across the State on Wednesday.

While we have had our up and down temperatures across the State over the past several weeks – last week being a perfect example where parts of South East QLD came within 0.2ºc of breaking 80 year old October records with 41ºc+ and then a matter of days later, it becomes the 8th coldest day of the year for the area. However these next few days (started in part today – Sunday – in South West areas) are expected to resemble truer Summer conditions.

Across the period of Monday to Wednesday, the majority of Inland QLD is forecast to push into the high 30’s and low 40’s. Some areas, like Birdsville are expected to climb up to around 43ºc while Longreach is one of many locations expecting to see 3 consecutive days of 40ºc+. While these temperatures are certainly NOT uncommon for this time of year (look at October 2018 as an example when Birdsville had temperatures push 45ºc and Winton reached 40ºc+ for the last 9 days of the month)… they are a sign that December and January are just around the corner, and they are still WELL ABOVE AVERAGE. For Winton, Tuesday or Wednesday could push 43ºc and challenge for the hottest day of the year so far. The most intense of the heat is expected to be on Wednesday when the majority of Inland areas are likely to see 40ºc+. 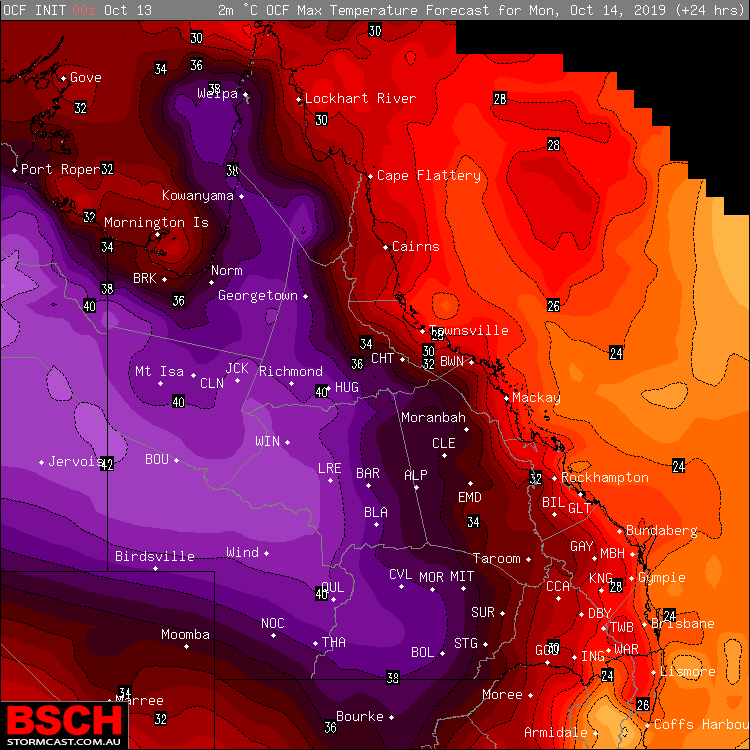 Maximums across QLD on Monday via BSCH / OCF

Luckily for those on the Coast, while the temperatures will rise – they aren’t expected to be anywhere near as bad. Maximums are expected to reach the mid 30’s across Interior parts of Coastal districts on Wednesday – however the Coastline itself will be more than tolerable. Similar temperatures are expected across these areas on Thursday as a cool change starts to move through, however maximums are likely to increase across Inland parts of the Wide Bay and South East Coast compared to that of Wednesday with temperatures peaking in the mid 30’s. 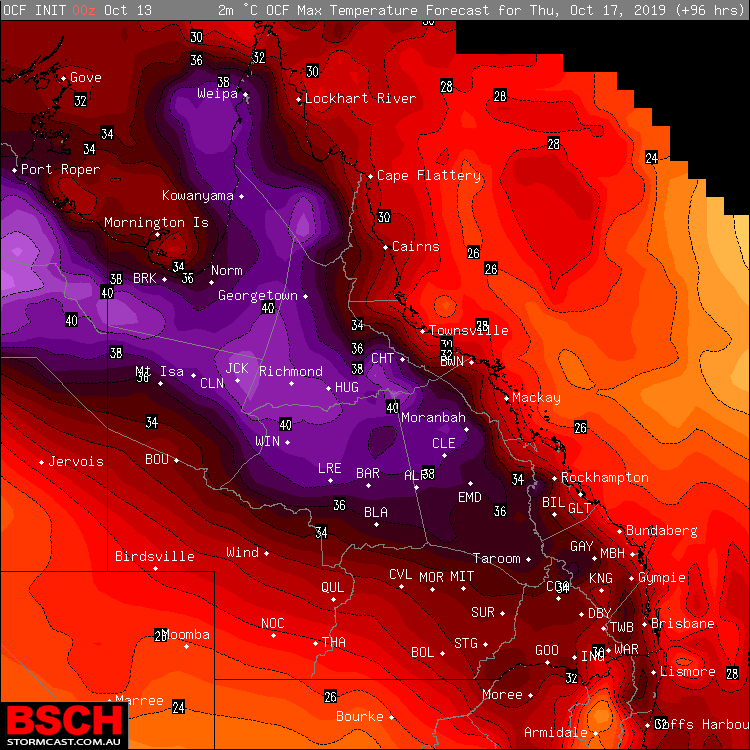 Maximums across QLD during Thursday via BSCH / OCF