Hurricane Dorian: Will It Make The Turn???

Home/Forecast/Hurricane Dorian: Will It Make The Turn???
Previous Next

Hurricane Dorian: Will It Make The Turn???

For several days leading up to this point, models have been adamant that Dorian will come roaring into the Bahamas as a category 4 or 5 system before slowing, stalling, stopping and then veering more Northwards. This scenario was a worst case scenario for the Bahamas but it was also the best case scenario for the Eastern seaboard of the United States and especially Florida as it meant the system remained offshore and ‘harmless’ to those areas.

Either way, this will be a defining moment for tropical history in the United States. There are 2 ways this can go and either way becomes unique in its own right.

Option A: The ridging pattern over Florida and the Gulf of Mexico holds. Dorian stalls over Grand Bahama for around 12-24 hours further before veering Northwards. A high over North East USA will continue Eastwards and Northwards and this will allow room for Dorian to move North along the ridge to the West. It will either be severely weakened as it encounters cooler waters and stronger vertical wind shear and this process will mean it comes ashore as a weakened hurricane over North Carolina or misses everyone altogether – recurving back out to sea and becoming a fish hurricane once again. While this scenario seems most likely out of the 2 given model agreement and forecasting data available.. it would also defy the odds somewhat as very few, if any, category 4 or 5 hurricanes have ever made the turn to the North – they all seem to power through in a straight line. 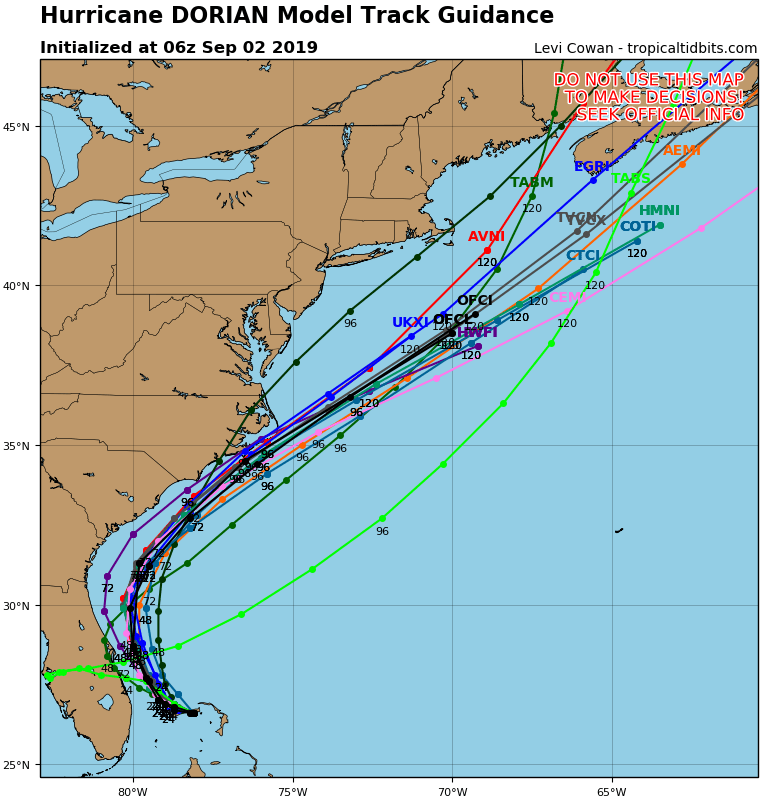 Global ensemble showing the most likely track based off CURRENT available data via Tropicaltidbits. Each line is a different model – the closer they are, the greater the confidence. 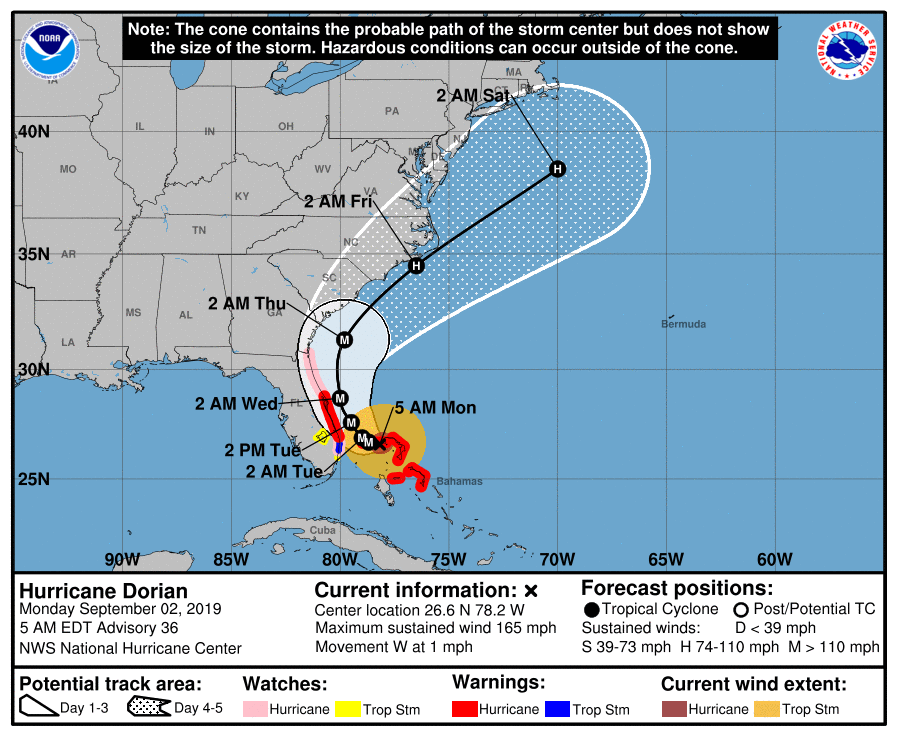 Forecast track map as of 2am Monday US EDT via the National Hurricane Center.

Option B: Dorian remains powerful enough that it bends the ridge back Westwards over Florida or even pushes through it – we don’t normally see this happening as it takes an extremely strong system to not be phased by the unfavourable conditions created by the ridge. This would mean that the system powers straight into Florida as a high-end category 4 or possibly category 5 strength system and becomes one of the most powerful hurricanes to make landfall over Mainland USA in history. This would not only become a life threatening situation for anyone within 100 miles of the system as it produces an extremely dangerous storm surge, very destructive winds which will likely cause significant tree and power damage along with significant damage to well structured buildings, along with flooding rain… but it would also become a life threatening situation for those further North, as the system would then use the land as a guideline to move North and North East across the rest of Florida, into Georgia and the Carolina’s as the system would be weakened by land interaction and the ride the ridge as per Option A (just further West).

Forecast Rainfall for Hurricane Dorian based off the latest data via the National Hurricane Center.