Its Going To Be Hot First Before Anything Else

Its Going To Be Hot First Before Anything Else

While all the focus is around Tropical Cyclone Oma and whether or not it is or isn’t coming to Queensland.. we do have other weather going on in the time being, the most significant being a low to moderate intensity heatwave which is forecast to move across the State during the first half of the week. Above image via OCF / BSCH showing Maximums for Tuesday.

A heatwave is classed as a period of 3+ consecutive days where maximum and minimum temperatures are at least 5ºc above average. The lower this anomaly, the lower the heatwave intensity, the higher it is then the higher the intensity. This is being classed as a low to “severe” or in other words, low to moderate strength heatwave where maximums are likely to be around the 5-8ºc maybe pushing 10ºc mark above the February average over the course of a 3-4 day period through the majority of QLD.

The heat is expected to build on Monday to above average over most of the State before a combination of a dry warming air mass combined with a dry South to South West flow over Inland areas and a very warm and humid North Easterly flow over Coastal areas kicks in and produces an increase in atmospheric heating. This is likely to produce widespread maximums of 40-45ºc and some isolated higher temps over Inland areas, while Coastal areas such as South East QLD should climb into the mid 30’s. This is likely to remain in place across Wednesday and Thursday as well where parts of South East QLD may push 40ºc while Southern and Central Inland areas scorch well above 40ºc. 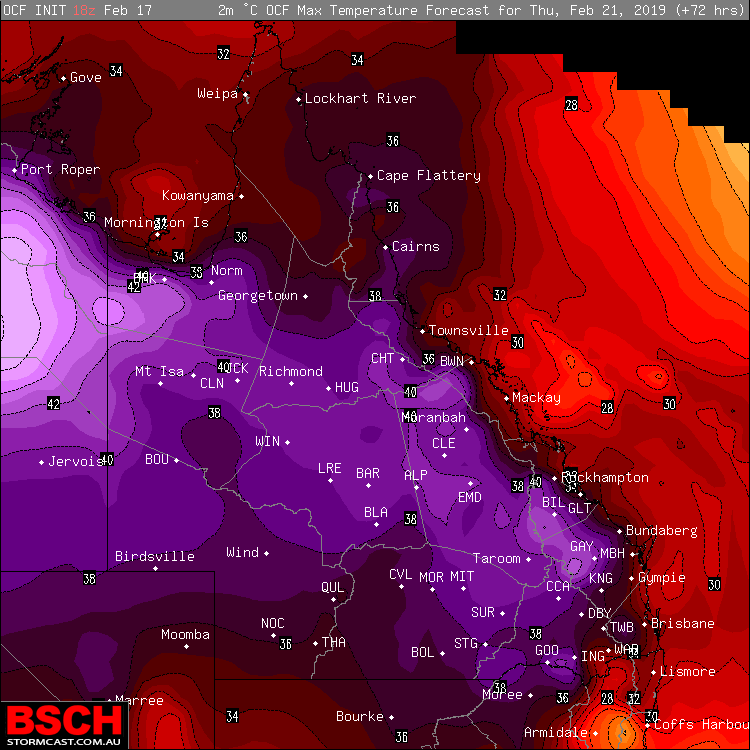 Forecast Maximums via OCF / BSCH for Thursday across Queensland

During Friday, the heat is expected to ease gradually over Southern and South East areas where maximums will still be above average but maybe 1-2ºc cooler than previous days. During the weekend however, regardless of what Oma does, a Southerly to South East flow is expected to scream in over the South East of the State and may drop temperatures to below 30ºc for the first time in 2 months for some areas while large parts of Eastern QLD should be back to at least normal if not below normal by Sunday. The only exception into the weekend will be Western and North West areas who will still be under the influence of 40ºc+ temperatures. 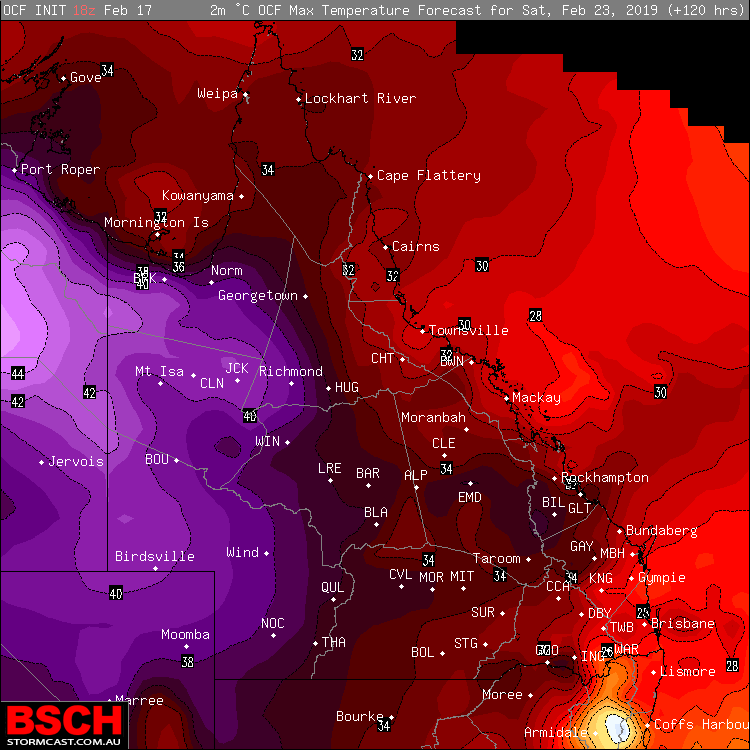 Forecast Maximums via OCF / BSCH for Saturday across Queensland