19 May Low to Bring Severe Weather to NSW & Eastern VIC

Posted at 12:11h in Forecast by Thomas 0 Comments
0 Likes

Weather forecast models are coming into agreement about a complex severe weather system impacting NSW and Eastern VIC from late Wednesday into the weekend. This system is expected to feature heavy rain, snow, damaging winds, possible storms with waterspouts and dangerous surf conditions for a number of days. Above image 5-day rainfall accumulation via Windy.

During late Wednesday and into early Thursday, a low pressure system is expected to develop off the NSW South Coast. Over the course of Thursday into Friday, this system is expected to intensify further into a POSSIBLE East Coast Low off the NSW Central Coast and its during this period of Wednesday to Friday that we will likely see the majority of the severe weather take place. The low itself is forecast to be quite complex, as its likely going to be a multi-centred low, which is a broad low pressure region with multiple centres of equal low pressure spread out within the broad area. The system will also see the majority of severe weather occur over the Westerns side, rather than circulating evenly around the entire system – even when it moves away from the Coast. 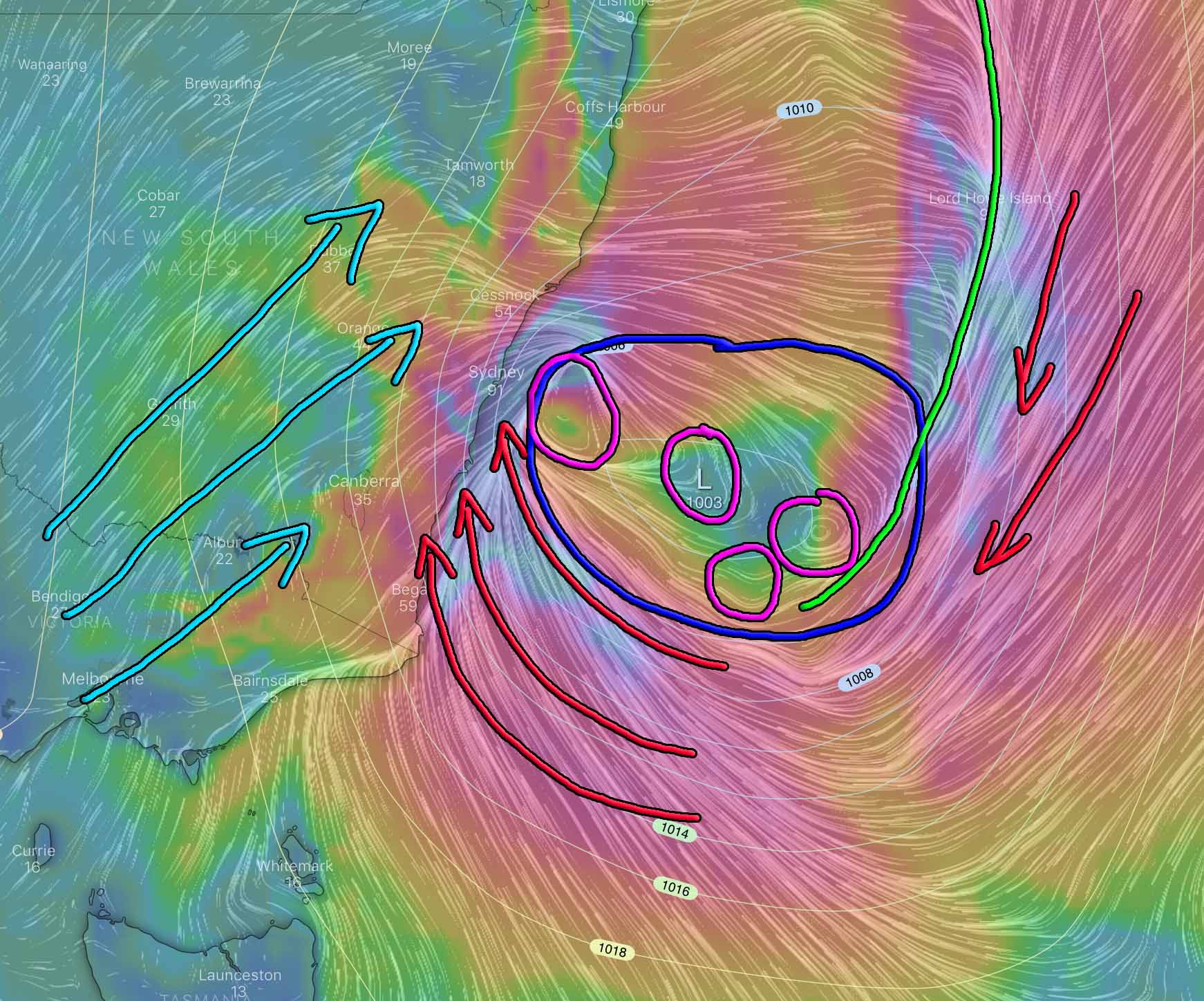 The most notable feature out of this system will be heavy rainfall along the NSW Central, Illawarra and South Coast areas initially with high levels of moisture being dragged across these areas resulting in continued rain areas. Models are indicating falls of 100mm+ are expected across areas over mostly the Illawarra which is a notorious hotspot for high rainfall totals with these kinds of setups. Moderate to locally heavy falls are possible as well over the Central Coast including Sydney, and the South Coast but rainfall across these areas should be less constant. This kind of rainfall will likely lead to some flash flooding along with some possible minor or moderate river & creek flooding depending exactly where the heaviest falls occur. Locally higher falls than those being forecast are also possible due to orographic lift. Storms will also be possible specifically on Thursday with increased wind shear created by the low leading to some storms either becoming stationary or slow moving with heavy rain and damaging winds, as well as waterspouts being possible offshore. During the weekend, rainfall is expected to increase with a Southerly wind flow over Eastern VIC leading to some moderate to locally heavy falls over the East Gippsland in excess of 50mm, and possibly up to 100mm.

During Wednesday evening into Thursday, snow is expected to fall over the North East VIC Alps, the NSW Snowy Mountains & ACT Brindabella Ranges and Southern Wilderness areas. This snow should continue throughout Thursday and possibly linger into Friday with a new wave of cold air aloft moving across the region. Snow is also expected to fall over Thursday evening and Friday morning across the Central Tablelands with enough snow forecast to cover the ground.

Strong winds are likely across the majority of VIC, ACT & NSW during this system’s existence. However across the Alpine regions, Central NSW Tablelands and NSW Central & Southern Coast areas, damaging winds are likely as well. This should lead to widespread wind gusts of 80-100km/h with peak gusts over exposed Coast areas and elevated terrain of 110km/h+. These winds will also combine with seas of 3-4m and peak wave heights of up to 6m over the NSW Central & Southern Coast areas to create unpleasant beach conditions.

NSW & VIC Snow & Storm potential from Wednesday to Friday. Base image via Windy.