It looks like its going to be a wet Easter across Eastern QLD for 2018 as the remnants of Tropical Cyclone Iris are felt along the majority of the QLD Coast.

Over the Easter period of Good Friday through to Easter Monday, isolated to scattered showers are expected to dominate the South East Coast and Wide Bay districts resulting in falls of 10-20mm becoming widespread and isolated falls of 30mm+ possible. The real activity is expected across the Capricornia, Central Coast & Whitsundays and Northern Tropics as falls of 100mm+ are likely to become widespread. 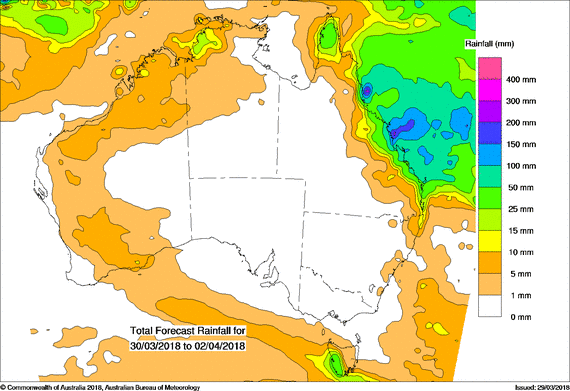 Ex-Tropical Cyclone Iris is forecast to be situated well East of QLD over the Coral Sea on Friday. The system is likely to be drawing a moderate to strong South Easterly flow over the majority of the QLD Coast leading to some isolated to scattered showers (mostly light). These showers should increase in both intensity and spread during Saturday as Iris moves West and closer to the Northern Tropical Coast. The heaviest falls are expected to be between Bundaberg and Mackay on Saturday. During Sunday, Iris is expected to nudge even closer, and this is likely to greatly increase rainfall totals across the Capricornia and Central Coast where falls of 25-50mm are likely and isolated higher falls are possible. Increased rainfall totals are also expected over the Northern Tropical Coast due to the angle of the onshore flow. Isolated storms are also expected across the Capricornia Coast and possibly the Central Coast which could cause some issues also.

During Monday, widespread significant rainfall is expected as Ex-Tropical Cyclone Iris becomes situated VERY CLOSE to the Northern Topical Coast. The system is likely to produce consistent rain areas across the Central Coast and Whitsunday region, resulting in widespread falls of 50-100mm and isolated to scattered falls of 100mm+. This will likely cause flash flooding and some river / creek rises. Further North, even heavier falls are expected with 100-200mm becoming widespread and isolated to scattered falls of 200mm+ likely. This will likely result in areas of flash flooding, river and creek rises which may exceed moderate to major flood levels depending on where the heaviest falls occur, along with some roads being cut due to flooding. If you are making holiday plans through these areas… go prepared for wet weather and keep a close eye on live data being posted as it may hinder or travel plans greatly.

Across Inland regions its expected to remain mostly fine the majority of the time apart from some isolated hit and miss showers here and there. Maximums across the Easter break are expected to remain near to slightly above average throughout the entire State.