Home/Forecast/Snow Rain And Cold For SE AUST
Previous Next


Issued 7th May 2019. A very strong cold front and low pressure system will bring widespread rain across Victoria with snow on the Alps this week. Scattered showers falling as snow expected across the Brindabella Ranges in the ACT and possibly even the Central Tablelands of NSW. Above image: Very cold airmass at 500mb via GFS/BSCH on Friday morning. The system is also expected to bring follow up rain to SA HERE.

On Thursday a very strong cold front moves into Western Victoria with a band of scattered showers and rain. Some isolated storms can’t be ruled out. The front continues to marching East reaching Central districts during the afternoon and evening. Rain is expected to turn to snow on the Alps during Thursday night where 5 to 10cms are possible. Very strong West to South West winds could easily kick up dust across Western NSW and Western Victoria.

During Friday the upper low of very cold air moves North East across Central and Eastern Victoria, Southern and Central NSW. Meanwhile a surface low is expected to be located to the North East of Tasmania. These features will combine to produce scattered showers across Central Victoria with hail tending to rain areas through Eastern districts. The scattered showers will fall as snow across the Alps above 1000 meters with 10cms expected. Cold Westerly winds are expected with top temps across Victoria between 10-14C and near zero on the Alps.

In the ACT in will be cold with some showers forecast which should fall as snow on the Brindabella Ranges above 1100 meters where a few cms are possible.

Across NSW cold South West to Westerly winds will extend across all of the state apart from the far North East. Showers are expected across the Central and Southern inland. Snow is possible on the Central Tablelands above 1100 meters which could include Orange, Bathurst but more likely the higher areas such as Oberon, Crookwell and Jenolan Caves. Below image: Snow forecast via ECMWF and Windy.

Good rain is forecast across large parts of Victoria from the system which should deliver about 15-30mm across Western, Southern and Central districts. 10 to 20mm of follow up rain is possible across Eastern districts but there is some uncertainty with these totals depending on exact position of the surface low on Friday. Below image: ECMWF rainfall forecast totals via Weatherzone. 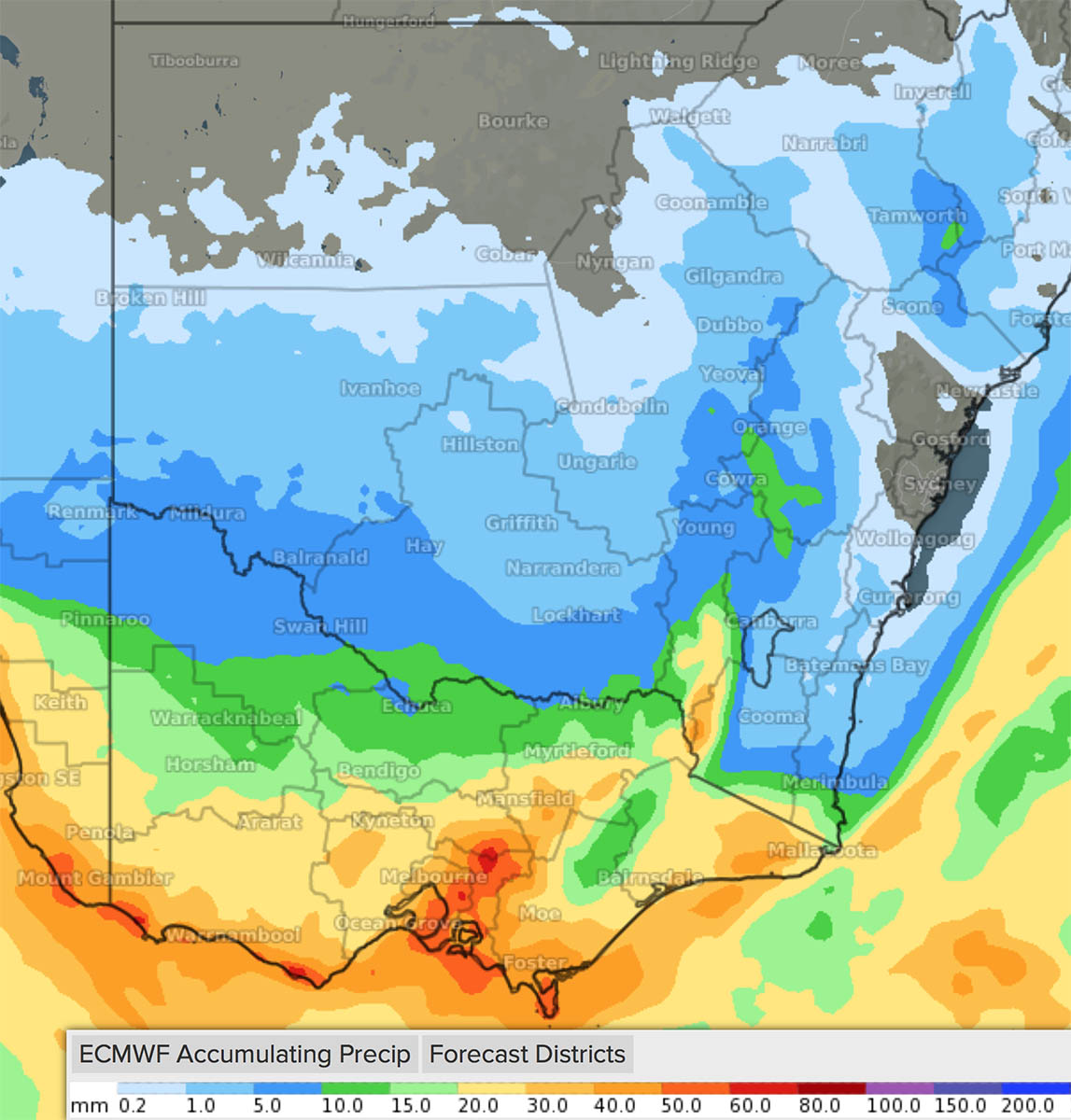