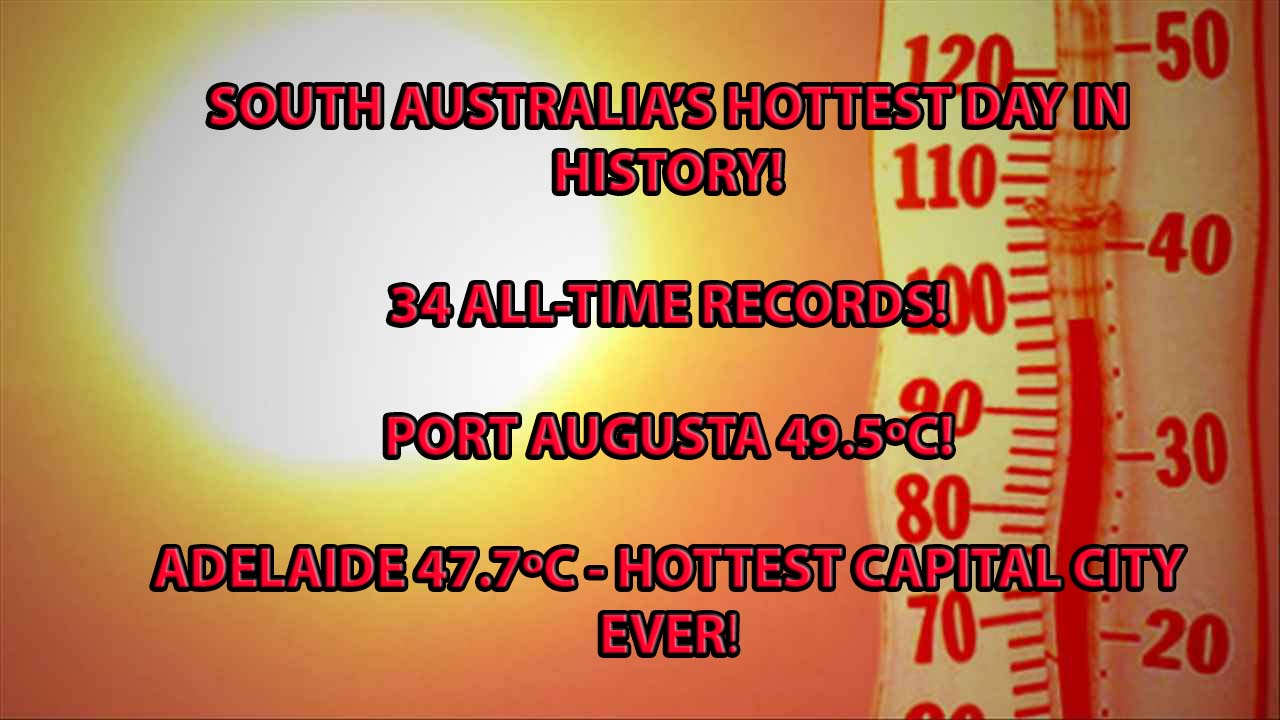 Posted at 18:06h in Weather News by Thomas 0 Comments
0 Likes

South Australia has just endured its hottest day on record as dozens of locations record their hottest day’s ever courtesy of a blast furnace sending inferno-like heat across the entire State. Adelaide City was one location that broke its all-time record as well as becoming the hottest capital city in Australian history as well! The raw numbers speak volumes for themselves as the majority of the State hit at least 45ºc! We have live access to 58 weather stations across South Australia… of those 58, 42 of them have exceeded 45ºc, 23 of them have exceeded 47ºc and 34 of them have broken their all-time record!

Additional Notes:
• Adelaide’s 46.6ºc at West Terrace is the highest temperature ever recorded for an Australian Capital City. This beats Melbourne’s 46.4ºc set back on Black Saturday. The 47.7ºc maximum at Kent Town is higher, however Adelaide City “officially” goes off the West Terrace data now. Kent Town was the old station.
• Port Augusta’s 49.5ºc is the highest temperature recorded by any location in 6 years for Australia. Previous highest was Moomba, SA 49.6ºc January 2010. This also makes it the second highest daily maximum for anywhere in Australia since 1998!
• 10 locations recorded at least 48.0ºc today – thats a new daily record for any State!
• This is the first time for January, since 2010 that 2 locations have recorded 49ºc on the same day. The last time it happened for any month was just after Christmas.
• Snowtown broke its all-time record (111 years of data) by more than 1 degree. Previous all-time record was 46.3ºc set back in the 1939 heatwave.
• Port Lincoln smashed its all-time record of 45.6ºc set back in the 1939 heatwave by more than 2 degrees! Records date back at the station to 1892!
• Edithburgh has broken its January and Summer record by over 2ºc, set back in January 2009. The all-time record was actually recorded in November.
• Nuriootpa has shattered its all-time of 44.1ºc by 1.9ºc!
• Ceduna has recorded its 2 hottest days ever, over the past 2 days. 48.4ºc yesterday was an all-time record which was re-broken today.
• Mount Lofty broke its all time record (set last year) by a staggering, more than 3ºc!
• This is the third time Tarcoola has hit 48.7ºc or higher this month. The last time any single town achieved such a feat (3 x 48.7ºc+ days in a single month) was Oodnadatta back in 1960 when the town recorded 49.2, 50.7, 50.3 on consecutive days.
• Today was the 8th day above 45ºc for Port Augusta this month.. a new record for the number of days exceeding 45ºc in a single month.
• Today was the 13th day this month above 45.0ºc for Oodnadatta. This monthly total now equals their entire Season record of 13 set last year, whilst extending this year’s record to 16 (3 last month + 13 this month).
• Today was the 6th day above 47ºc for Oodnadatta which is also a new station record for any given month.
• Stenhouse Bay on OCF (Operational Consensus Forecast) – its the average of 12 seperate models to give the most likely outcome… was forecast to hit 35.6ºc today, it surpassed that by 11.1ºc – potentially the biggest difference ever recorded on OCF. 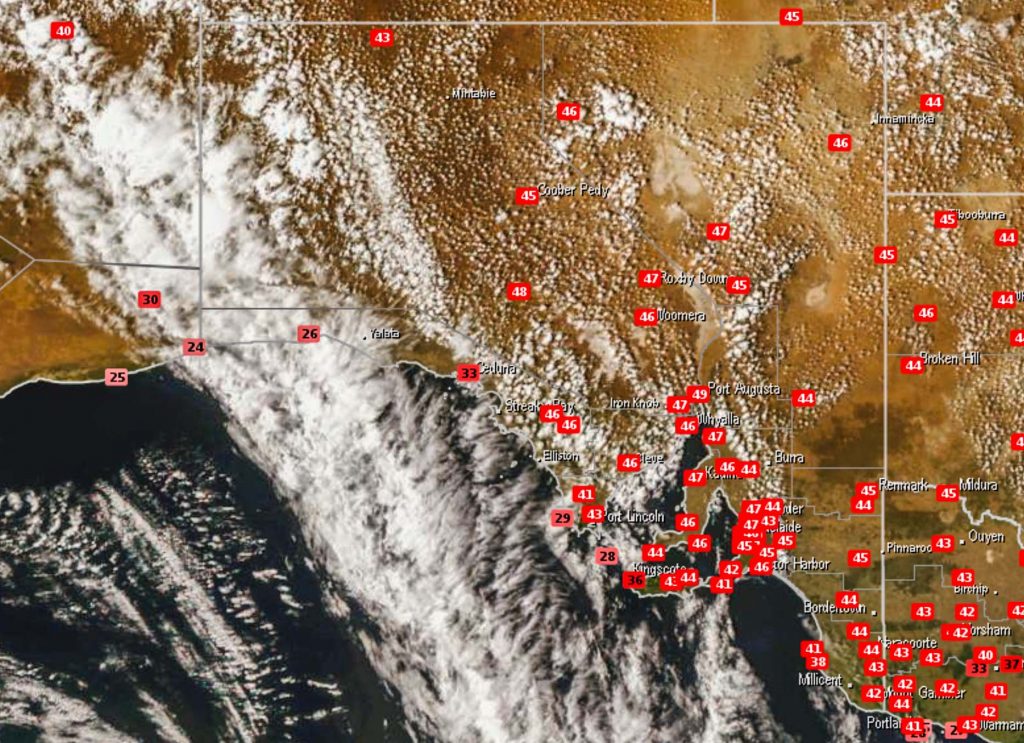