Sudden Stratospheric Warming: What It Means For Australia

Home/Forecast/Sudden Stratospheric Warming: What It Means For Australia
Previous Next

Sudden Stratospheric Warming: What It Means For Australia

A ‘Sudden Stratospheric Warming’ is set to take place mid September across Antarctica with its effects potentially being felt across Australia and New Zealand. This event has the potential to be unprecedented for the Southern hemisphere due to its abnormal / rare occurrence and its potential strength which models are showing already. Above image showing the SSW (Sudden Stratospheric Warming) over Antractica via Weatherzone.

Okay. So a Sudden Stratospheric Warming event is set to take place. Models are pretty keen and confident on this occurring. Before you dismiss it as a load of nonsense, we need to understand exactly what it is and then maybe we can have a better understanding about how it effects us. You can be forgiven for being naive about it as these kinds of events aren’t that common in the Southern Hemisphere, with the only reliable data really only coming out of the Northern Hemisphere and UK more specifically.

But how can it warm so quickly?
Every year, strong Westerly winds will circulate around the Antarctic (or Arctic). These winds form what we know as the stratospheric polar vortex which occurs high above the poles and produces excessive amounts of cold air. In some instances though, these winds will weaken for a period of time – more commonly between the changing of seasons into Winter and out of Winter when the atmosphere itself is changing. As these winds weaken, they can sometimes reverse and move from East to West instead. This causes the colder air to descend in the polar vortex and the air replacing it above is much warmer – which leads to a rapid warming and thus a Sudden Stratospheric Warming. As the cold air sinks towards the surface, it causes our weather at the surface it begins to change the pattern of the jet stream and this can alter the weather at the surface in a cold fashion.

There have been cases in the Northern Hemisphere (more so the United Kingdom) in recent history, from 2009-10, 2013 and what was dubbed ‘the beast from the East’ in 2018.

As the jet stream snakes more in its shape, it has tended to create large areas of blocking high pressure. In the Northern Hemisphere, these high pressure regions have typically developed over the Northern Atlantic Ocean and Scandinavia. What this has meant, is the area in between – the United Kingdom – has had extensive periods of dry, very cold (often icy) weather. In other words, those typical conditions where its a blue sky but so cold that its like the morning frost cant melt. Southern Europe during this same time, was slightly milder but also very wet and windy. The boundary between the large area of prolonged dry and wet and windy (between the United Kingdom and Southern Europe) has lead to extremely snowy conditions. The effects of these events at the surface may only begin to appear weeks after the event started 50km above the surface, so while its already underway now over Antarctica – we may see nothing until mid September.

How can we translate this to Australia and New Zealand – well we cant really as we don’t know where the 2 blocking high pressure systems will be and where the ‘in between’ will be. What we can assume though, is there will be 2 large area of high pressure, in between them will be an area of very icy, cold, dry conditions. North of that will be an area of very wet and windy conditions, and in between will be very snowy – whether that actually happens over Australia or South of Australia will be a wait and see game, but given we are closer to the Equator than the United Kingdom, chances are our impacts will be less than theirs during the 2018 ‘Beast from the East’ event. St Marks Square, Venice – during the Beast from the East in February 2018. Image: Lumina Film Bauer Palace via AP 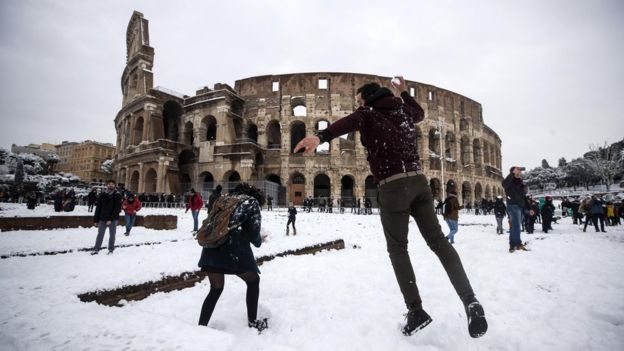 The Coliseum in Rome, white for the first time in years during the ‘Beast from the East’. Image via EPA