Monday (30/1) Storms possible over the Southern South East Coast, Ranges, Eastern and Southern Downs, Granite Belt and Maranoa areas during the day. Rain areas increasing during the night over these same areas.
Tuesday (31/1) Rain areas and embedded isolated storms spreading across most of the forecast region. Some storms becoming severe over Northern Inland areas. Moderate falls possible over various Inland areas.
Wednesday (1/2) Isolated storms likely over the Wide Bay & Burnett, storms possible over the South East Coast with light rain areas occurring across the day.
Jump to...
Add a header to begin generating the table of contents
<<< Go back to the portal home page

A wind boundary is expected to become established along the Ranges throughout the forecast region during the day. This wind boundary is expected to act as a supplementary surface trough, which will inject Easterly winds over Coastal areas and North to North West winds over Inland areas. These winds are expected to help inject increased moisture over the region, which will hep to fuel a warm and unstable airmass over the forecast region throughout the day. This will likely lead to some isolated showers and possible storms developing during the afternoon along the Ranges, over Interior pita of the South east Coast, Wide Bay & Burnett and through Eastern parts of Inland areas of the forecast region. As the day progresses, storms are expected to become less likely… but rain areas are expected to set in, as active expands from North East NSW across the Border into South East QLD. The highest likelihood of rain areas occurring will be over the Southern Downs, Granite Belt and Southern parts of the South East Coast – with some further activity spreading North along the Ranges. These rain areas are expected to be mostly light, but the longevity of them will allow for rainfall accumulations to build. This will liekly lead to falls of 25mm+ across the Granite Belt, Southern Downs and Southern parts of the South East Coast – with rainfall accumulations easing further North and West.

Across Western parts of the forecast region, mostly fine conditions are expected during the day and into the early night… however ongoing showers, rain areas and storms from South West and Southern QLD are expected to push into the Western extremity of the forecast region (Warrego & Maranoa / Western Downs). Most of this activity should be weakening as it reaches this region during Monday night and into the early hours of Tuesday morning… however some isolated storms may still be ongoing within the rain areas. Any storms that manage to be ongoing, are expected to produce heavy rain and gusty winds… with rain areas help to produce falls of 20-40mm over the South West of the forecast region and totals easing further East and North. 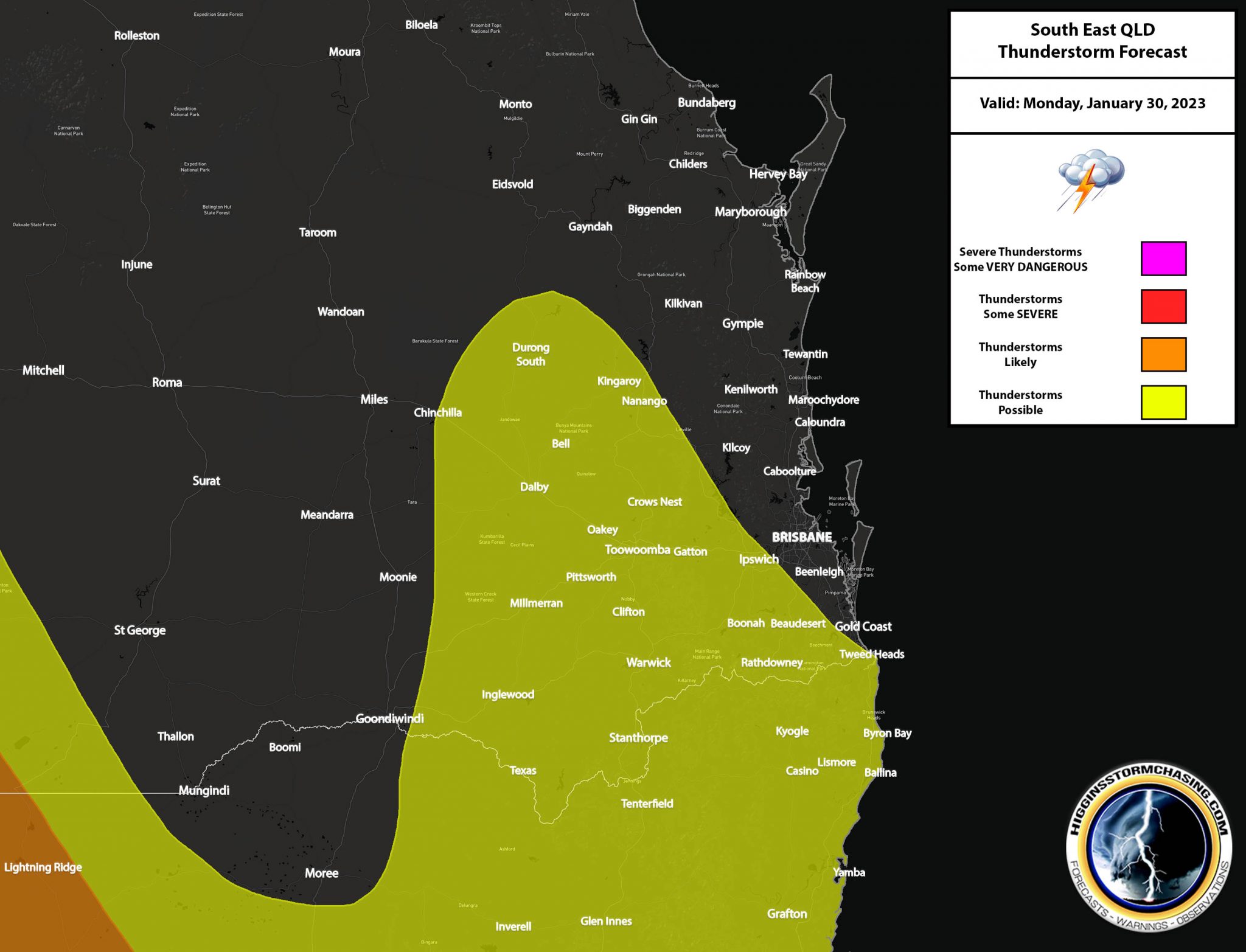 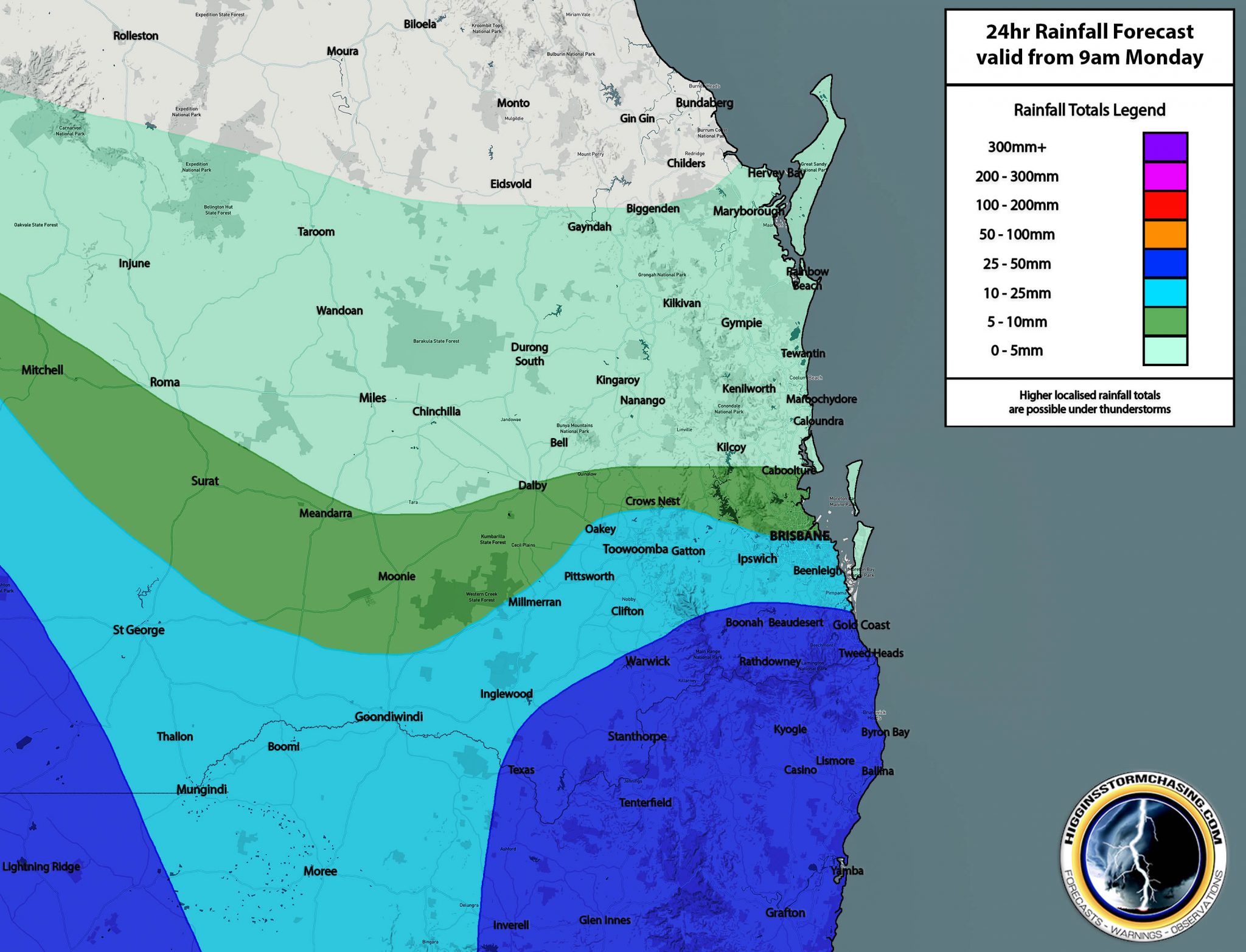 This will likely result in some showers and isolated storms developing over the Warrego & Maranoa and Western Downs during the morning, with showers, light rain areas and embedded isolated storms becoming more likely over Inland areas during the latter part of the morning and into the early to mid afternoon. Some of these storms may become severe during the early to mid afternoon across North West parts of the forecast reign, where the trough line is in a better position and there is less cloud to take some of the intensity out of the storms. During the latter part of the afternoon, through the evening and into the night, showers, rain areas and isolated embedded storms are expected to continue across the Darling Downs and Granite Belt, pushing into the South East Coast and Central Highlands. Some storms are expected to remain severe over Northern areas of the forecast region – however most cells across the Darling Downs, Granite Belt and South EAst Coast are not only expected to be isolated at best and embedded in rain areas, but also remaining fairly weak with heavy rain being the primary threat. Any severe cells further North may contain damaging winds and heavy rain (large hail is a reduced threat). Most of this activity should dissipate during the night, or at least weaken down to the point of being just showers whilst pushing into Coastal areas.

Due to a combination of rain areas, showers and embedded storms – widespread falls of 10-20mm are expected across Inland areas of the forecast region, with locally higher falls of 25mm+ across the North West of the forecast region. Falls of 5-15mm are expected over Coastal areas, with the higher falls being further South due to the tilt in the trough and the timing of the activity reaching the Coast (it should reach Coastal areas across the Gold Coast long before reaching Coastal areas of the Wide Bay). 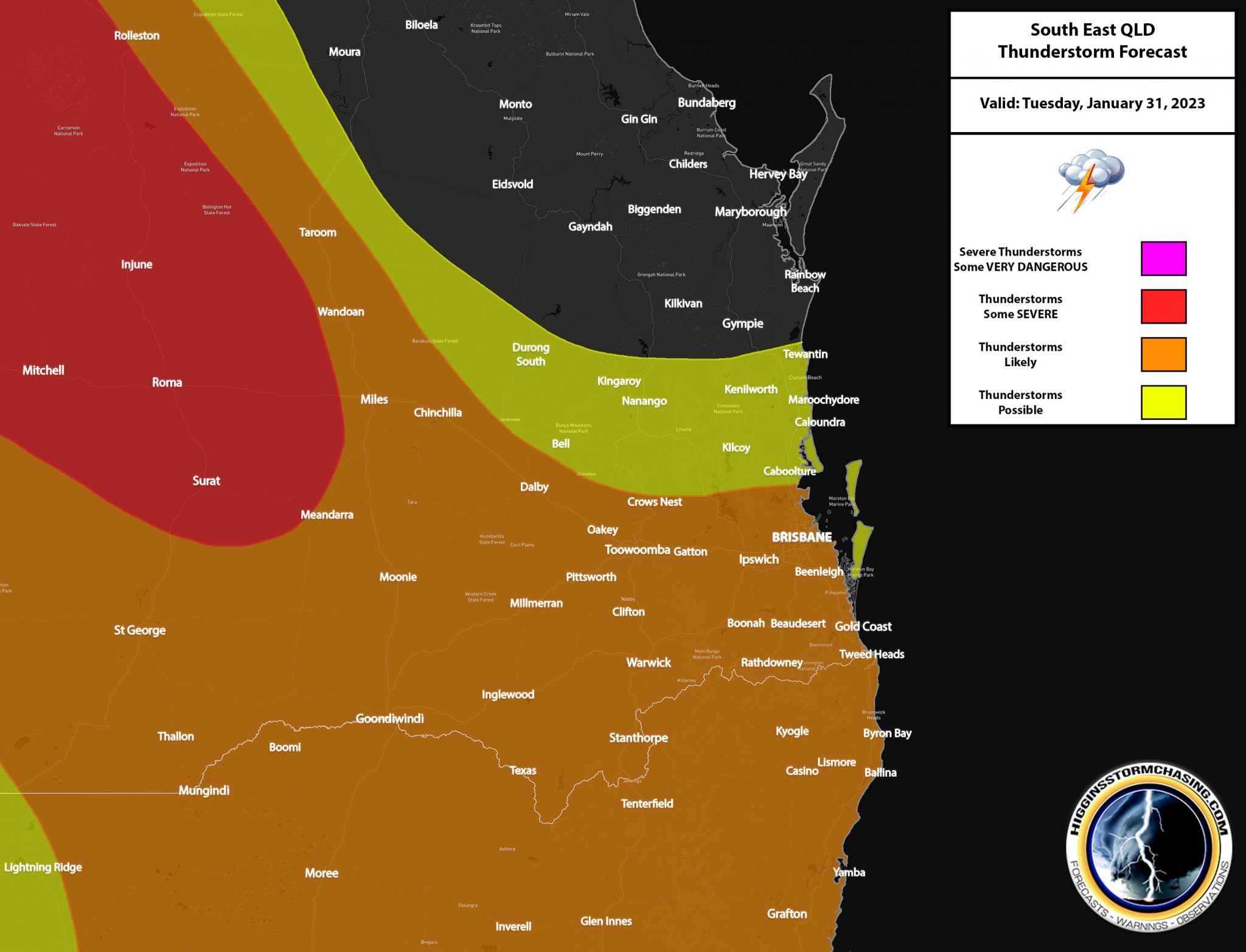 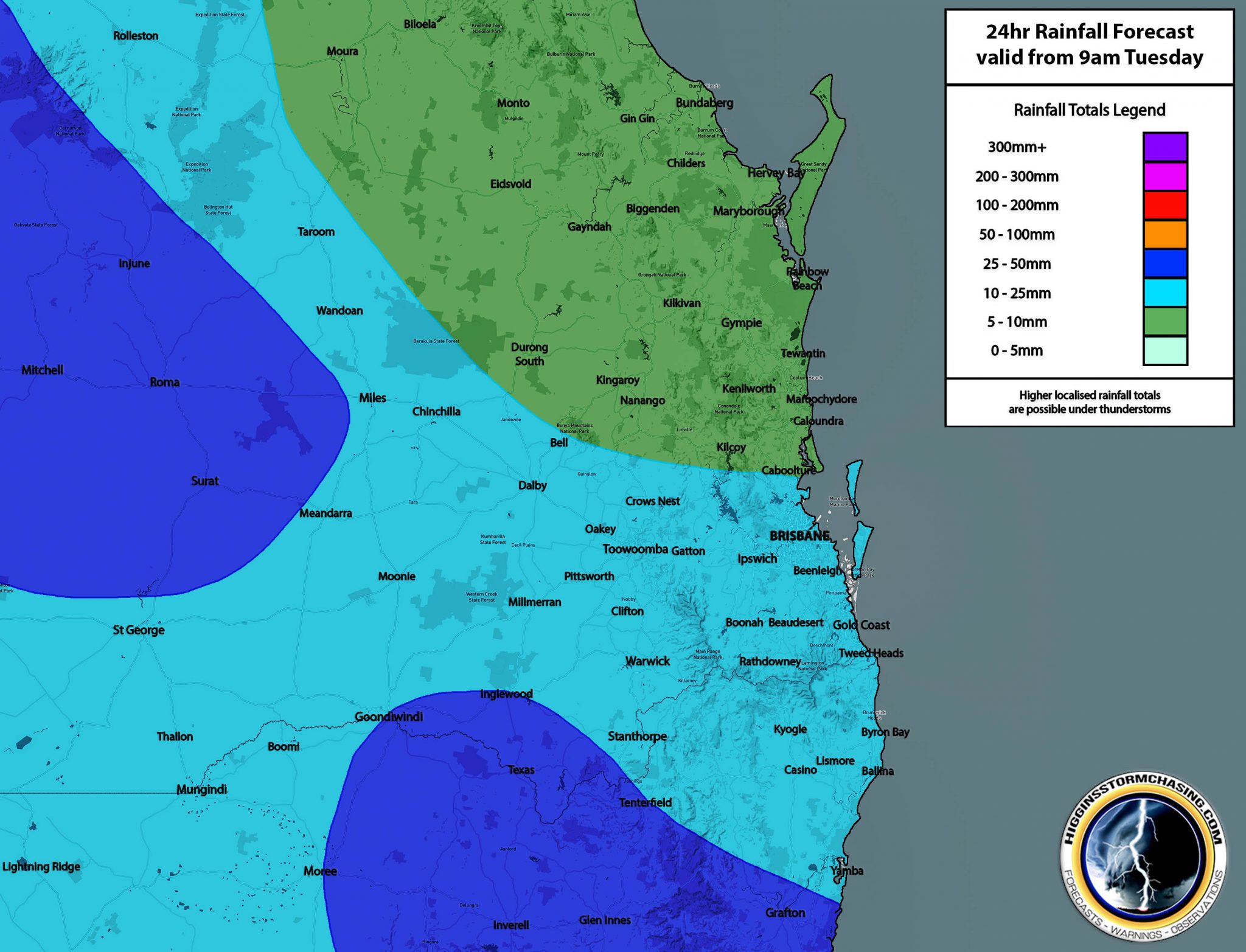 Across Inland areas, whilst rainfall is expected, most rainfall should be fairly light and patchy throughout the day and eventually clearing during the night as the system pushes too far East. This will likely limit overall accumulations to less than 10mm for the majority of locations (and for areas across the Western extremity of the forecast region, less than a few mm is expected). 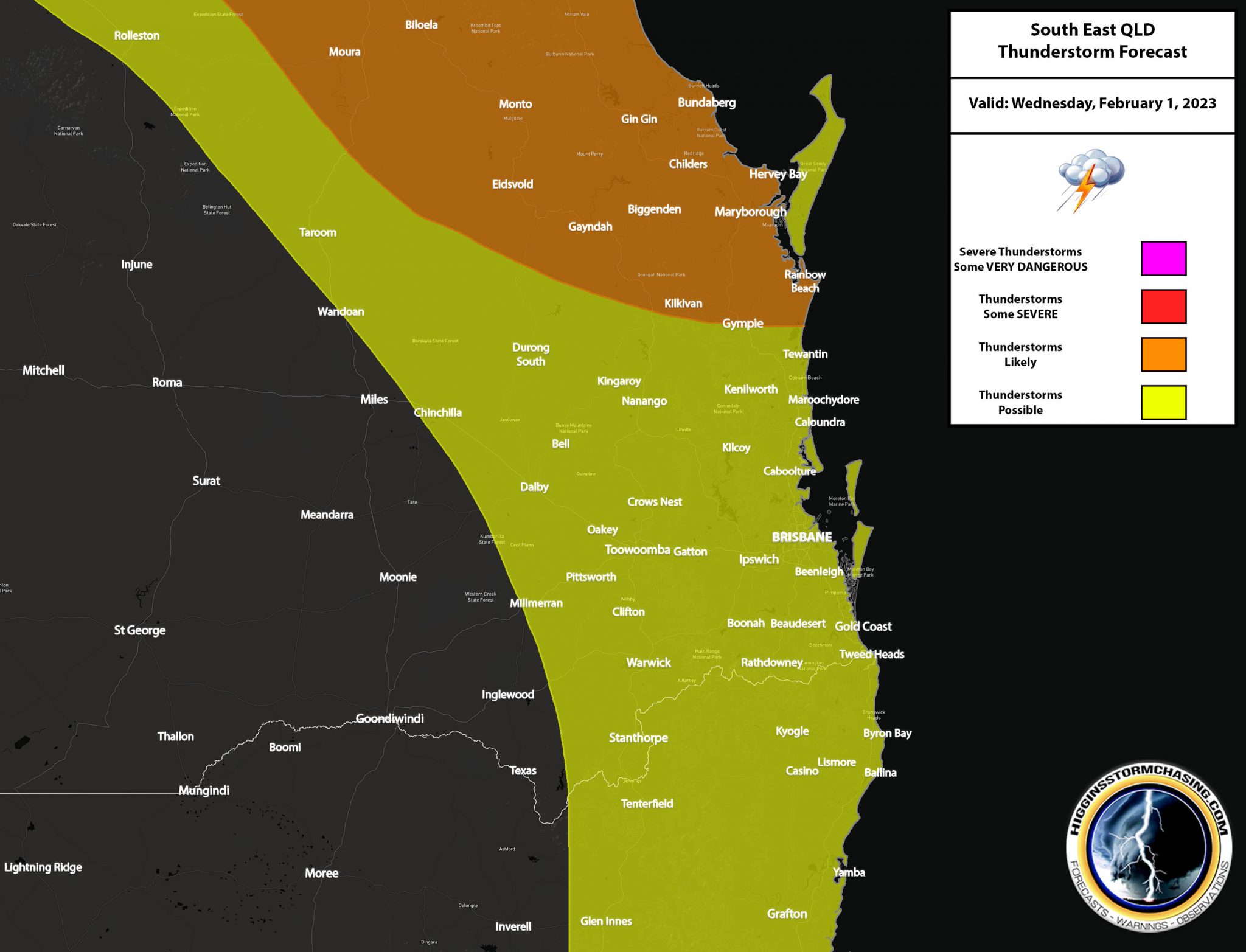 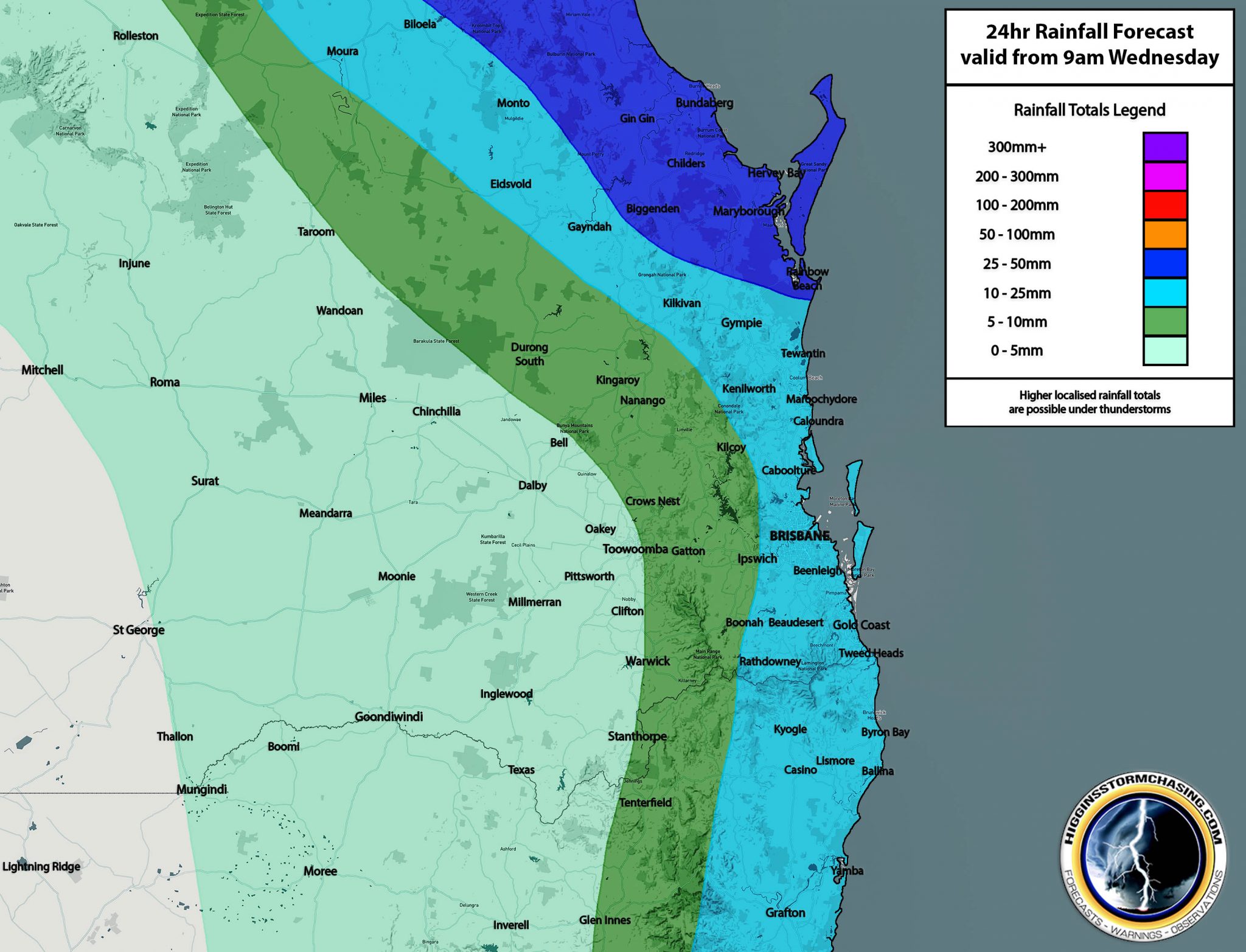 Issued 2nd January 2023
There is no flood risk or flooding rain currently forecast. NOTE: Our forecasts and maps are accurately produced using the data assimilation process of various global models. They are not copied nor reproduced from any other weather agency or source. All information behind the subscription paywall must NOT be shared to any third parties without express permission.