Lightning & How does it occur

Home > Weather Education  > Lightning & How does it occur 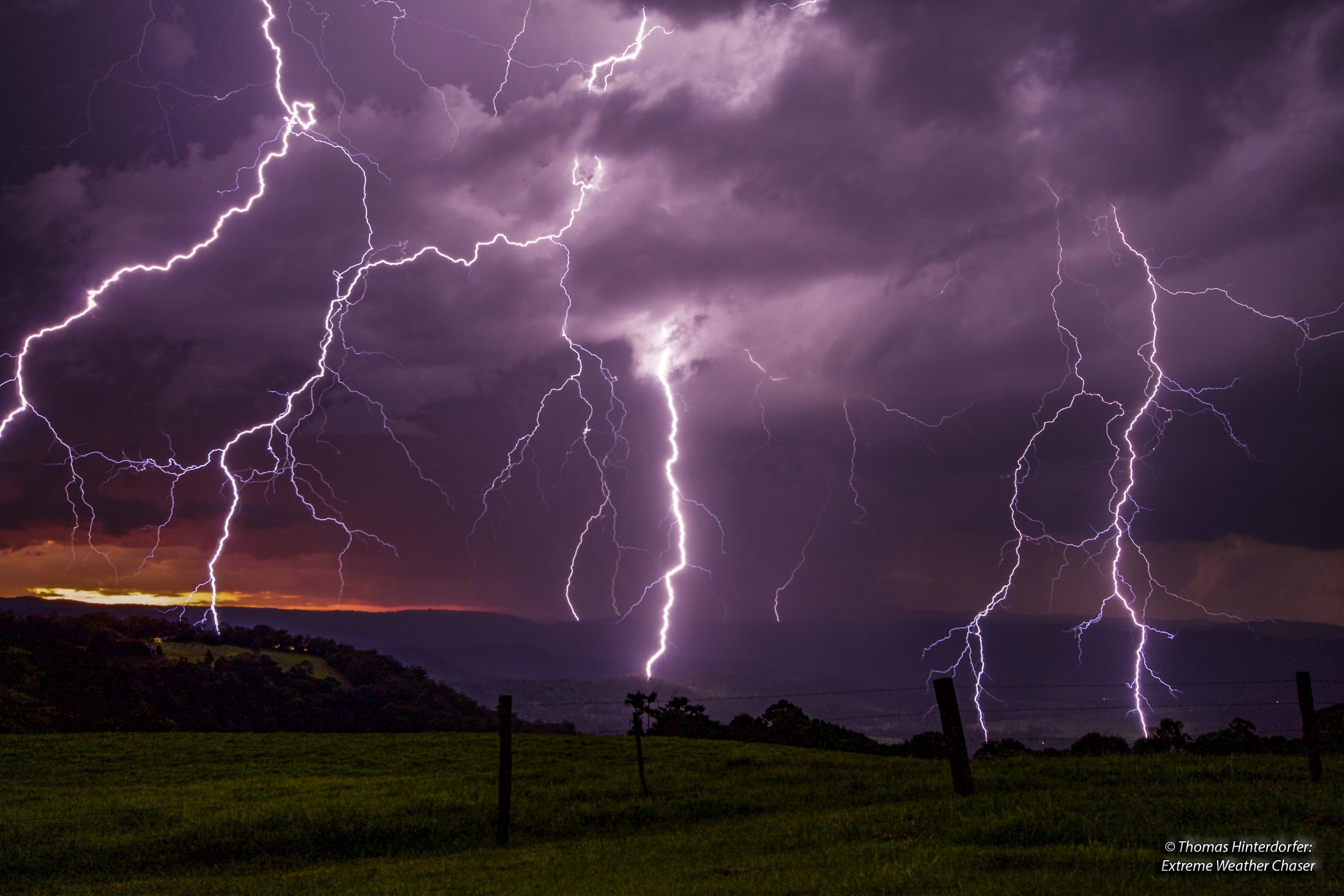 16 Oct Lightning & How does it occur

Posted at 16:27h in Weather Education by Thomas 0 Comments
0 Likes

Lightning is one of the most unpredictable and dangerous phenomenons in regards to weather. Lightning is the key to a shower becoming classified as a thunderstorm, and its also one of the most fascinating features that can get weather enthusiasts and “everyday” people both in awe. The cracking sound of lightning and the ominous close range, weirdly shaped, dynamic lightning strikes keep everyone captivated… and once its done, most people cant wait for the next time. But… what is lightning, whats it made up of, how does it form, why is it dangerous, what are the different types of lightning, what happens when it hit certain things… theres a million questions when it comes to lightning, and in this we will answer some of them for you.

The majority of lightning happens within the cloud due to the attraction between positive and negative charges. If the surface of the Earth becomes intensely positively charged, then the attraction between negative charges in the base of the cloud and positive charges on the surface of the Earth have the ability to cause cloud to ground lightning. If these positive charges flow through things such as buildings, trees, lightning conductors or even people… then there is a chance that the lightning will strike these objects instead of the ground. 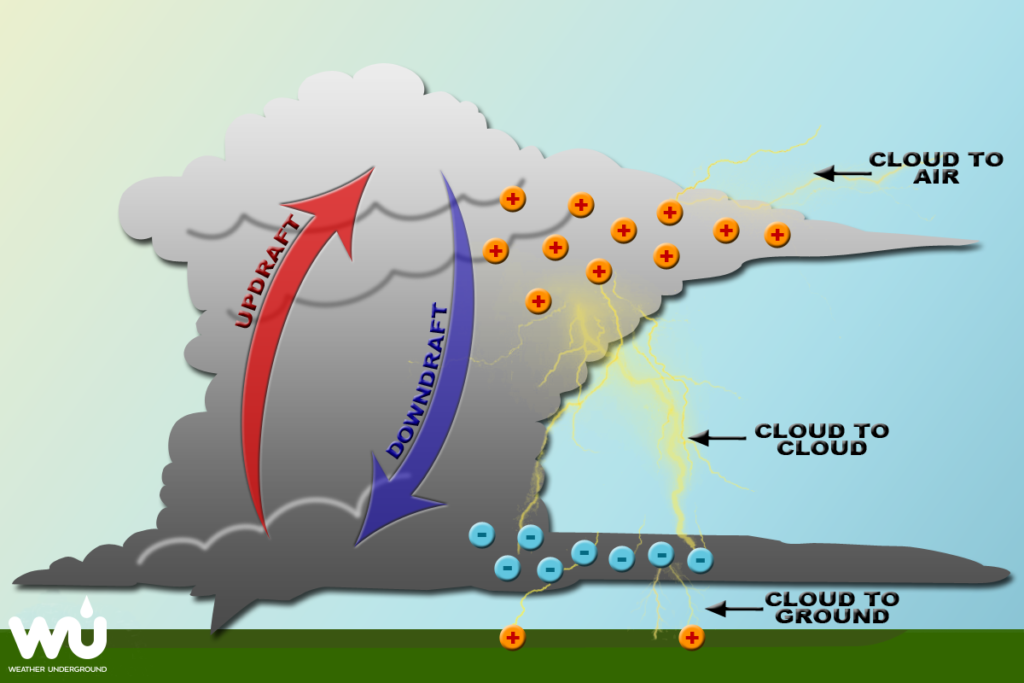 Mechanics of how lightning forms via Weather Underground

What is lightning made up of?
As stated above, lightning is made from the interaction between positive and negative particles / ions in the cloud and between the cloud and ground.. but lightning itself is made up of various elements. Lightning discharges are a major source of nitrogen oxide gases. The 2 primary gases (nitric oxide and nitrogen dioxide) are formed during the lightning discharge when the air is heated to its maximum temperature. Since the air is made up of both nitrogen and oxide atoms, the new compound is formed when the lightning channel expand outwards and cools. The amount of nitrogen oxide that is formed depends on how rapid the cooling of the lightning channel is. Due to this chemical occurrence, lightning is vital for the survivability of the ecosystem and Earth in general.

Correlation between lightning and thunder?
Lightning has been detected to travel up to 300 million metres per second, this is compared to the speed of sound which is around 300 metres per second. That means lightning occurs around 1 million times faster than it sounds. The sound of lightning is what we know as thunder. Due to the difference in speed and sound, thunder will always occur after lightning and its the distance between you and the lightning strike that determines how soon you will hear the thunder. A common way of working out your distance from the storm is to count the time between the flash or strike and the start of the rumble of thunder. The time you come up with (in seconds), is roughly how many kilometres you are from that particular strike.

Dangers of lightning?
One of the dangers of lightning is that it is so unpredictable. No computer modelling, satellite imagery or anything of that nature… nothing at all on Earth can detect when and where a lightning bolt will develop and strike ahead of time. While we all know lightning occurs during thunderstorms, and we love a good light show at night during a thunderstorm… what some people fail to realise though is that clear-air lightning strikes (CA) have the ability to strike at ridiculous distances from thunderstorms. In fact, there have been a few instances in the past where we have seen bolts up to 100km from the nearest part of the cell striking the Gold Coast and up to 80km out the other side of the cell. While most clear air lightning strikes occur between 0 and 10km from the storm itself, evidence shows that in the most violent storms (due to the anvil) its possible for lightning to strike much further away and this is why during thunderstorms its important to stay sheltered.

Lightning is one of the deadliest phenomenons in nature. Due to the amount of electricity that it contains and the extreme heat within the strike (up to 30,000ºc which is 6 times hotter than the sun), lightning can kill people instantly and while lightning related deaths thankfully aren’t overly common in Australia (although they do occur several times a year during the storm season), up to 60 people on average are killed in the United States, with hundreds if not thousands more inured also.

By virtue of averages, some statistics have been discovered as to where the most common lightning-related deaths occur. More than 54% of people are killed in open fields, ball parks or golf courses. 23% of people are killed under trees which get struck. 12% of people at the beach or in the water / watercraft such as boats. 7% of people whilst operating farming equipment due to the open nature of the fields and the ion attraction that farming equipment has, and 4% is elsewhere. While you are never 100% absolutely safe when lightning is around, these stats may help in increasing your chances of being safe. 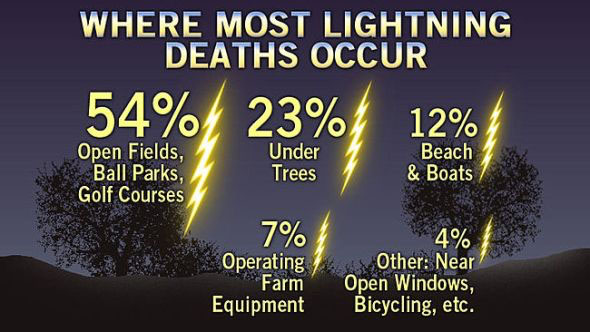 Lightning if it doesn’t kill you, has the ability to severely burn you. If a lightning bolt strikes you, it has the ability to interact with your body in different ways as it seeks ground contact. Depending on how your body is in contact with the ground results in various channels the strike can take. The most common is through your body (not around it). This is when the strike will enter a part of your body, travel internally through you – potentially hitting or narrowly missing vital organs and then exiting another part of your body. This can cause major problems internally as whatever it hits, can be severely burnt or ruptured. Another way is externally, when the bolt will travel around your body and this can cause widespread major burns to your skin. Both methods have the ability to travel through your veins and cause excruciatingly painful burns which mimic spider webs on your skin, if it occurs internally though… then the electric current can travel through your blood supply and enter your heart, causing an extreme heart attack. 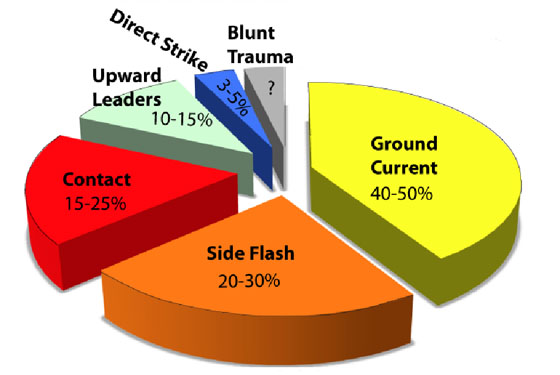 What happens when lightning hits certain things?
Not all things are burnt or explode when lightning strikes it. Although the most memorable lightning result that we know of is a tree or light pole being set on fire, maybe even some grass being caught alight as the strike hits it. but different things happen to other objects.