Posted at 17:42h in Weather Education by Thomas 0 Comments
0 Likes

When we talk about thunderstorms and rain events, a term which is commonly used is steering winds or steering strength. These are arguably some of the most vital winds for any given weather event – whether its rain, showers, thunderstorms, cold fronts, East Coast Low’s even heatwaves can be influenced not so much by “steering winds”, but the winds within that part of the atmosphere.

Where are the steering winds?
Steering winds are the winds between roughly 850mb and 600mb in the atmosphere. The variation is based solely around what the clouds are doing as lower based clouds may be impacted by the winds more likely between 850mb and 700mb, while higher based clouds may be impacted more by the winds between 700mb and 600mb. The term “mb” stands for millibar and its a standard unit of measurement when looking at the atmosphere, while the actual value in feet or kilometres differs ever so slightly from place to place, the millibar value remains the same as a way of comparing. When looking at these heights, 850mb is roughly around the 5,000ft mark while 600mb is closer to the 14,000-15,000ft mark. Its highly unusual for clouds to be influenced that high in the atmosphere, but its not completely unheard of.

What are the steering winds?
The steering winds are the low to mid level winds in the atmosphere which dictate the direction of thunderstorms and rain-bearing cells. While all cloud patterns are steered, its these winds which are most vital to us as weather chasers and reporters, along with the general public as its these winds which can be the life and death of a thunderstorm day for YOU individually.

If the steering winds mix with turning with height, in other words the winds from the surface to 10,000ft, 15,000ft or even higher turn as the go up, then this is where stationary rain areas and stationary thunderstorms come into play. These are the kinds of localised cells which have the ability to produce flash flooding as the cells don’t move.

What are the threats with steering winds?
The other thing to note with steering winds, is the stronger they are, the more likely the severe potential is as these are the most likely winds to be dragged down to the surface through microbursts and downdrafts. As these winds accelerate on a downward trajectory its very possible that damaging to even destructive winds may occur. 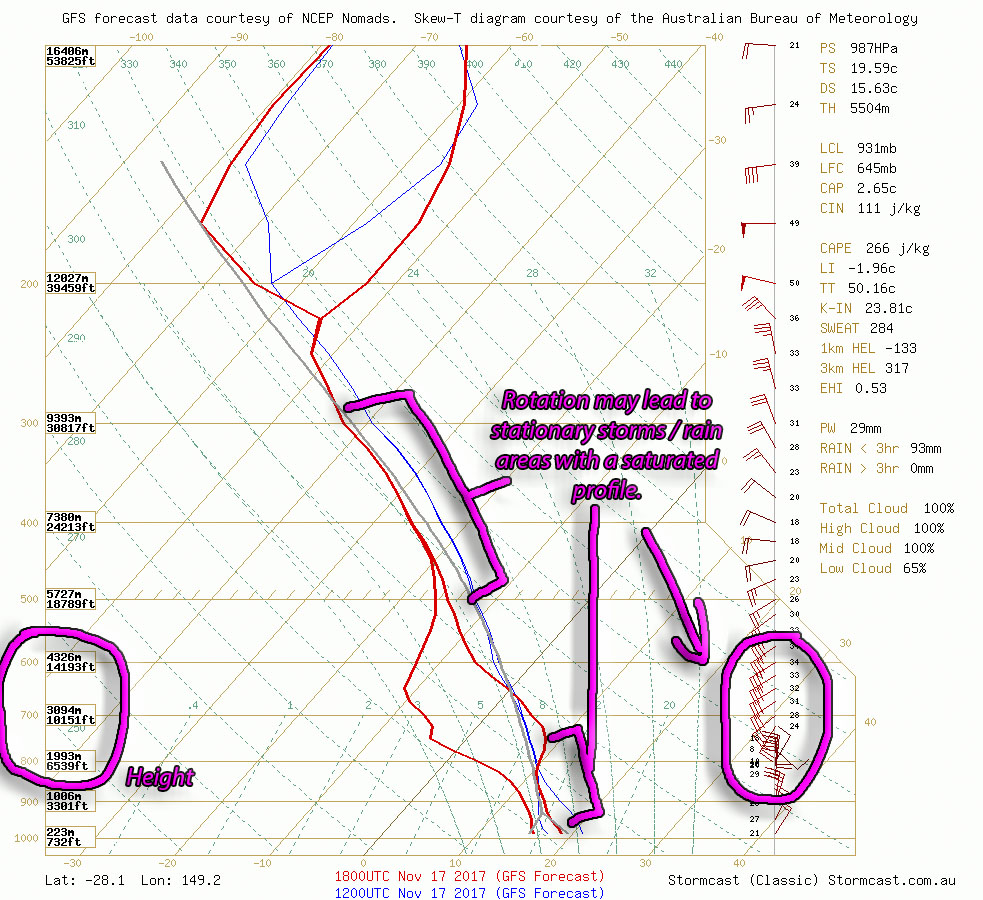 An example of rotation the steering winds which could cause stationary storms / rain areas, increasing the flash flooding potential. Image via BSCH for November 18th (AM) North of Goondiwindi