Rainfall Summary for the Townsville Floods as of February 6th 2019 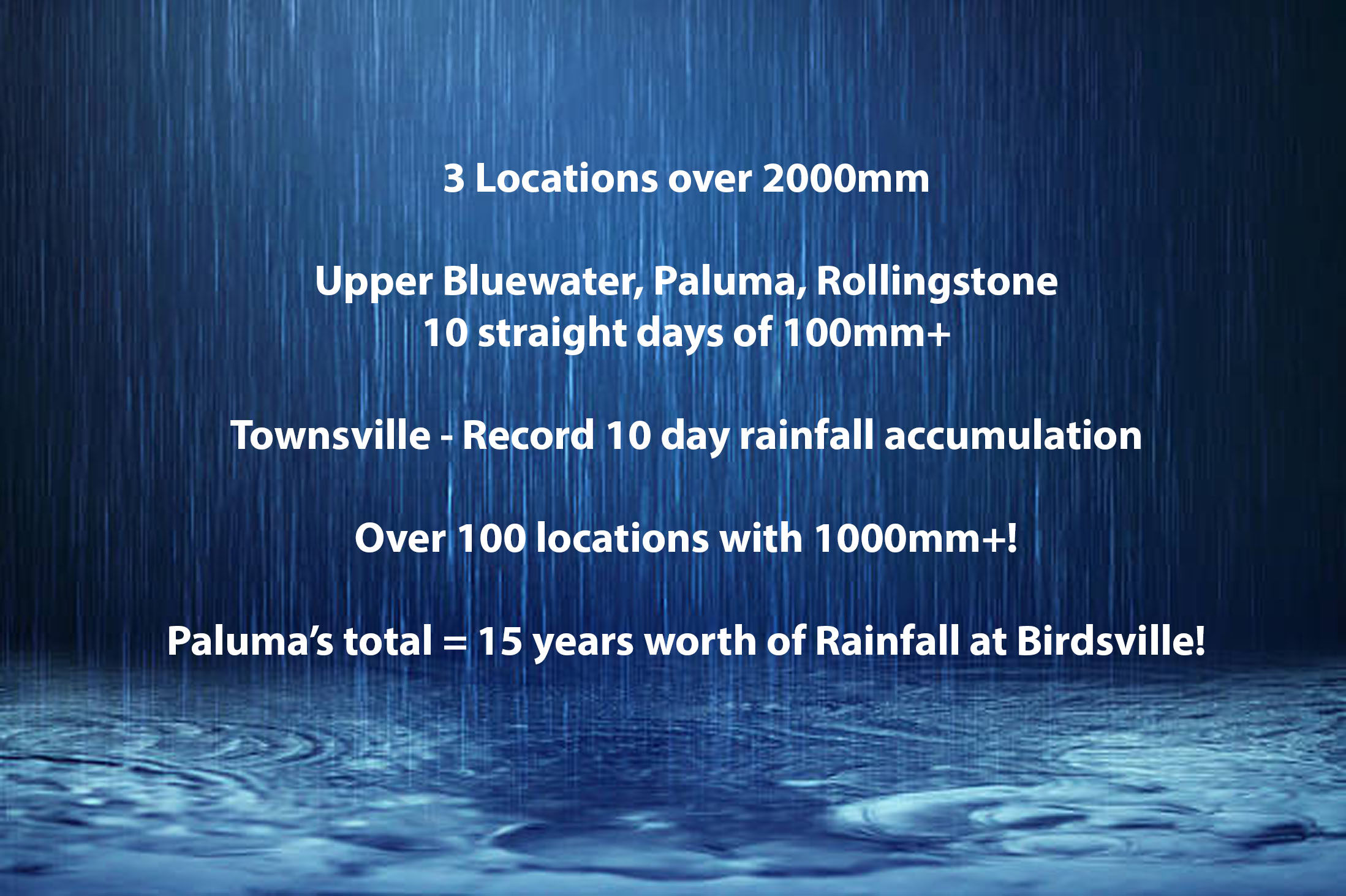 Posted at 11:52h in Weather News by Thomas 0 Comments
0 Likes

The rainfall totals that keep on keeping on.. even when it seemed like the bulk of it was over, another 50-150mm has fallen over the Townsville area overnight with up to 250mm in some isolated areas. Thankfully for those further South, the predicted 200mm+ didn’t come off, with models failing to pick the monsoon trough convergence movements – this limited the impacts further South, despite some high accumulative totals occurring over the past 10 days regardless of last night. 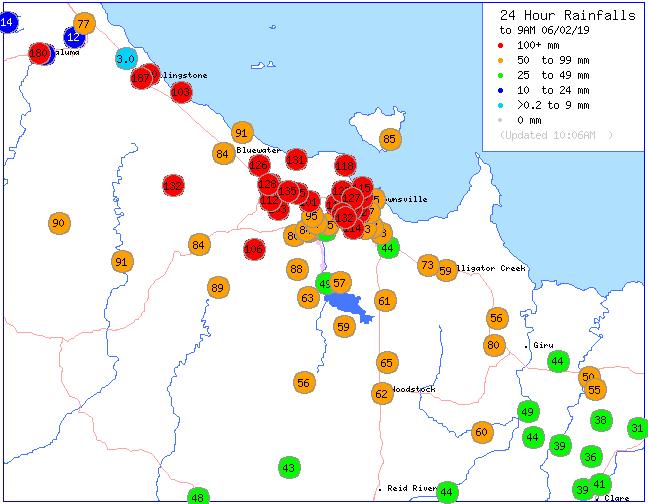 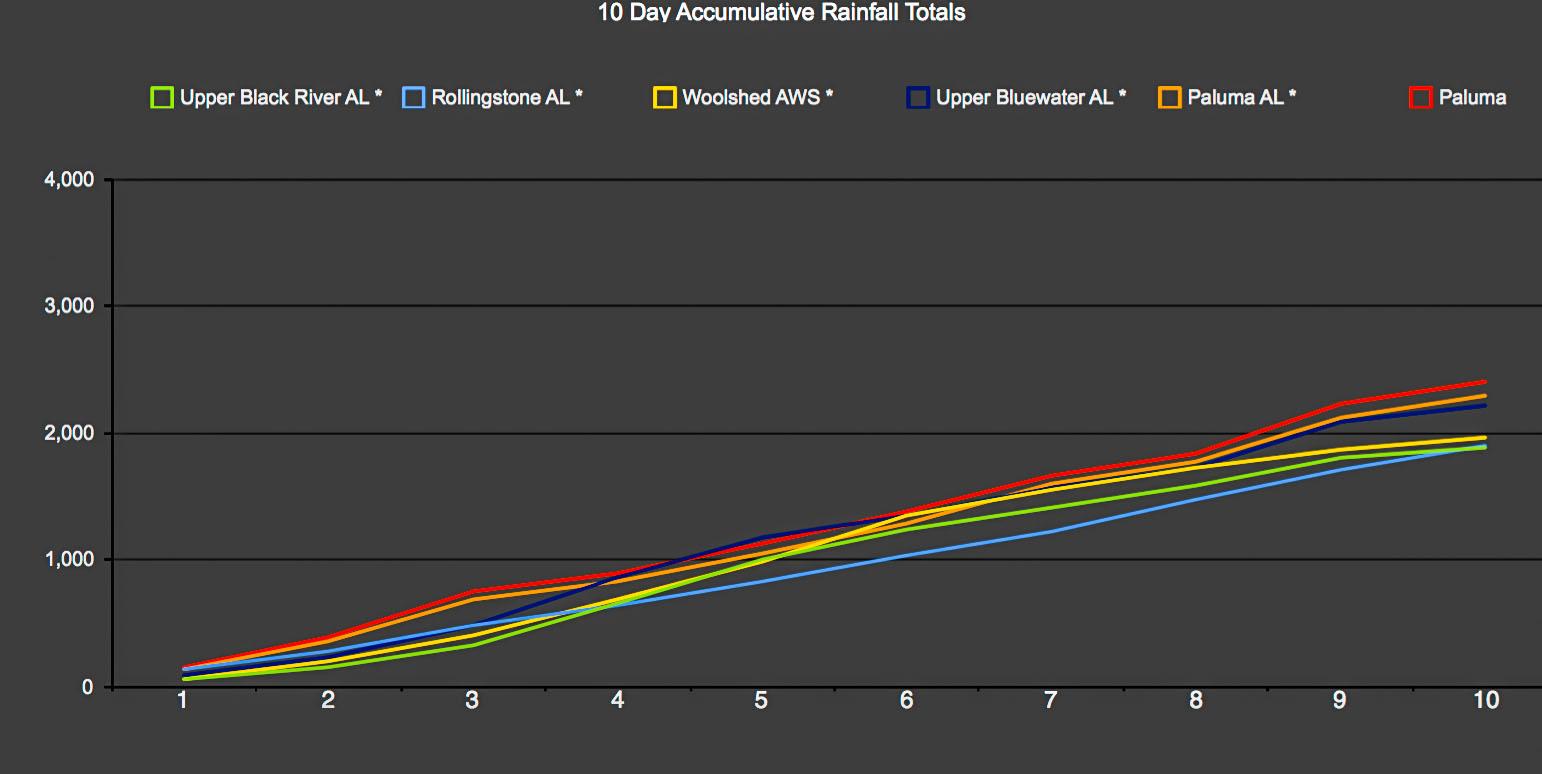 Additional Notes:
• Paluma’s 2406mm is likely the highest rainfall event total (regardless of duration) from the past 40 years – since Mt Bellenden Ker recorded well over 3000mm.
• Upper Bluewater, Paluma and Rollingstone have maintained their run of 100mm days, with 10 consecutive now. While it would be a very lengthy process to check, there is every chance this is the highest consecutive tally of 100mm days for well over 20 years, possibly even over 50 years as many of the high end rain events didn’t cover 10 days over the past 70 years and Mt Bellenden Ker’s 3800mm in 1979 was over 8 days, not 10+. (Not sure why Paluma was removed from previous blogs with this streak – this was an oversight) – Several locations between Townsville / Ross River Dam and Ingham had a streak of 7-8 consecutive days of 100mm+ as well
• Upper Bluewater is still the only location to record 3 300mm+ days from this event. Woolshed still holds the highest consecutive 200mm days with 5.
• Well over 100 locations have now surpassed the 1000mm mark for this event
• Townsville is just 97mm shy of its wettest February in recorded history (960mm from 2009 is the record) and the 1257mm over the past 10 days for Townsville City is also well above the previous 10 day accumulative record for the City.